Anyone with contact lenses understands the frustrations of having to replace the lens every day or having to submerge them in a liquid, so they do not dry up. The material they are made out of is a hydrogel, and they are renowned for drying up into a crusty mess if they are not constantly hydrated. However, last summer engineers from MIT discovered a way to prevent hydrogels from dehydrating. The technique will allow for much longer lasting contact lenses, advancements in flexible bioelectronics, and could potentially become a viable component of artificial skin.

Traditional hydrogels readily evaporate once they come into contact with air. But, by binding elastic polymers (like rubber and silicone, both of which are stretchy like hydrogels), the outer layer of the gel became impervious to water. Coating the hydrogels with a thin layer of elastomer creates a barrier which prevents water from evaporating, thereby keeping it moist, flexible, and robust.

The lead engineer of the project Xuanhe Zhao, the Robert N. Noyce Career Development Associate Professor in MIT’s Department of Mechanical Engineering, says the idea for the layered material is inspired by human skin. Similar to the hybrid polymer, skin is made up of multiple layers; the outer epidermis which is bound to the underlying dermis layer. The main functions of the epidermis are to act as a shield to prevent foreign material from entering the body and to protect the body's muscles and organs from drying out. 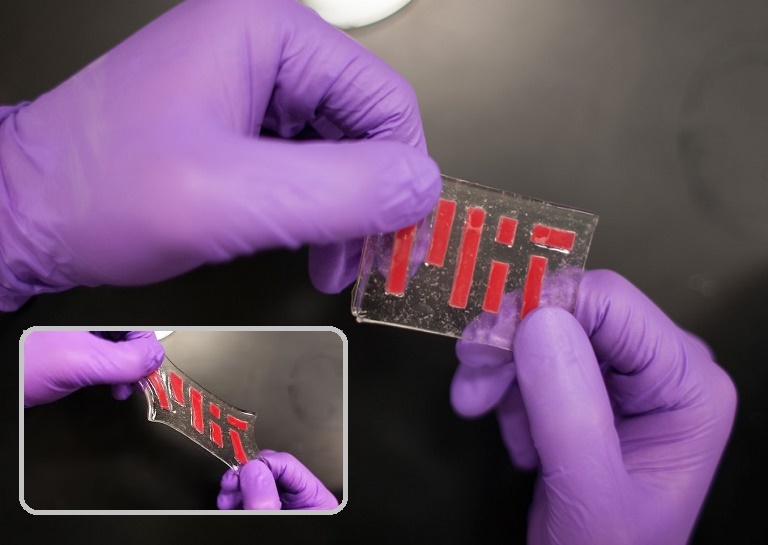 Applications in the real world

The hydrogel-elastomer hybrid is surprisingly an improvement of skin. The bond between the elastic polymer and hydrogel is many times stronger than the bond between the epidermis and dermis. Further improvements are being made by implementing tiny channels into the hybrid material to act as artificial blood vessels. Other variants of the material contain embedded complex ionic circuits which can mimic nerve networks.

To test the material, the researchers subjected the elastomer to UV light. Even after 48 hours in a dry laboratory environment, the mass of the material remained nearly identical, confirming the hydrogel retained most of the moisture. Further tests examined how much force was required to separate the elastomer from the hydrogel. It was determined that a force over 1,000 joules per square meter is required to separate the two, which is significantly higher than the force needed to separate the skin’s epidermis from the dermis.

“This is tougher even than skin,” Zhao says. “We can also stretch the material to seven times its original length, and the bond still holds.” He continuous, “We hope this work will pave the way to synthetic skin, or even robots with very soft, flexible skin with biological function."

Further applications could even see it be used as a "smart" bandage. The embedded electronic sensors can monitor oxygen levels, blood pressure, and other vital information- all while being able to conform to a continuously moving body. 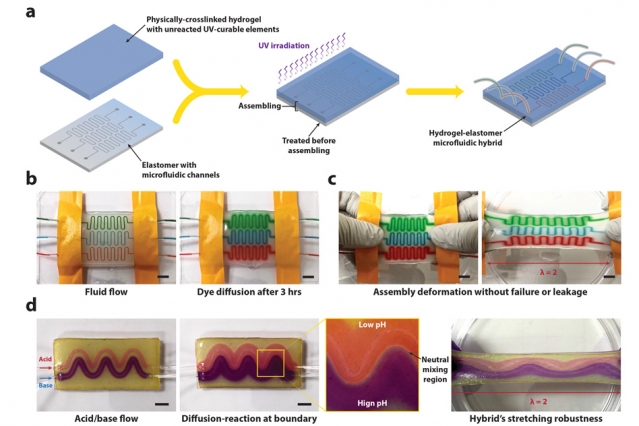 Demonstration of convection of chemicals through the channels of the skin [Image Source: MIT]

The channels act as a simple network of blood vessels, able to transport and distribute liquids through the material. The researchers believe the hybrid-elastomer material can be used as a stretchy microfluidic bandage capable of delivering drugs through the skin.

“We showed that we can use this as a stretchable microfluidic circuit,” Yuk says. “In the human body, things are moving, bending, and deforming. Here, we can perhaps do microfluidics and see how [the device] behaves in a moving part of the body.”

The group of researchers hopes to develop the material to be useful across a broader spectrum of applications including as a wearable electronic device and as an on-demand drug-delivering bandage. Further research is being conducted to test the viability of creating a nondrying, circuit-embedded contact lenses giving rise to the possibility of much more durable lenses.

SEE ALSO:MIT Researchers Created The Strongest Material In The World