The X-ray pulses emitting from the shredded star enabled researchers to measure how fast the black hole whirls around.

We certainly do know that black holes exist in our universe, but when it comes to specifics, we are still lost. For researchers, it's not an easy task understanding the mass and spin of a black hole, thanks to the very nature of it.

Black holes are considered to be elusive, and most of this elusive nature comes from the fact that they absorb light, making them the darkest of blacks in color. They do not emit electromagnetic radiations that can be easily detected. Researchers estimate the approximate mass of a black hole by studying the size of the galaxy that surrounds it.

It is believed that a black hole is present at the center of every major galaxy. Their size, mass, and the gravitational pull vary from one to another. Some are as big as large cities, while there are others bigger than the Earth itself.

How X-Ray Pulses From Outer Space Give Away Black Holes

One way of determining the stats of a black hole is by measuring its X-ray spectra. Then again, black holes do not emit them all the time. However, one instance where it does emit x-ray radiation is when a black hole consumes a star. The death of star due to the black hole is called Tidal Disruption Event (TDE).

When the star is caught in the field of a black hole, the star gets split into two. Half of the star gets consumed while the other half will be flung away. Such massive destruction of a star will produce X-rays of varying intensity. Researchers can make use of the projected X-rays and their pulsing to determine the spin of the black hole.

This is what researchers at the MIT Institute did with a TDE named ASASSN-14li, which was discovered in 2014. In 2014, a flash of X-ray energy was detected from the TDE that became the topic of study for the researchers.

Decoding ASASSN-14li – The Death Of A Star

Dheeraj R. Pasham, the author of the study and his team noticed that this TDE varied in quasi-periodic oscillation every 131 seconds. This meant that X-Ray pulse oscillated every 131 seconds and stayed that way for at least 450 days.

Pulses of X-rays happens throughout our universe, but it doesn’t necessarily mean a black hole every time. However, the fact that pulses from ASASSN-14li stayed active for 450 days means that these pulses are most definitely from objects that orbit the black hole. 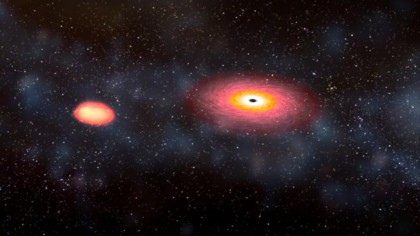 By studying the oscillation, the researchers were able to determine the spin of the black hole to its mass. The mass was calculated to be that of a million suns.

By referencing the pulse with this mass, researchers could figure out how close the debris spun to the black hole. The researchers were able to estimate the spin of the black hole to be 50% of that of the speed of light.

"Events where black holes shred stars that come too close to them could help us map out the spins of several supermassive black holes that are dormant and otherwise hidden at the centres of galaxies," said Dheeraj Pasham. "This could ultimately help us understand how galaxies evolved over cosmic time."

The findings of this research are published in Science.