A yearly competition at MIT's engineering department saw undergraduate students create a variety of robots. The machines were themed after Willy Wonka's chocolate factory and could perform all of the game's tasks.

This Thursday, MIT students taking 2.007 (Design and Manufacturing I) embarked on an adventurous robot competition based on Willy Wonka’s chocolate factory. The competition was set under the guise of a board game hosted by the course’s instructors Sangbae Kim, playing Willy Wonka, and Amos Winter, playing Charlie Bucket.

First introduced in the 1970s by Professor Emeritus Woodie Flowers, the competition offers mechanical engineering students real experience in robot building with an added factor of creativity. “We’re all engineers; we can do better than pure imagination,” said Winter to launch the event, according to release. “We can do calculated imagination!”

The competition saw 32 finalist students go head-to-head by using their robots to complete the game board’s tasks such as lifting gummy bears, pushing Gobstoppers into a river of chocolate, freeing Oompa Loompas and putting kinetic energy into a spinning mushroom.

The activities were based on basic mechanical engineering principles such as traction, gripper design, sensor integration, autonomy, and optimized motor power.

“Each task is specifically designed to guide students to apply fundamental mechanics knowledge to their own design executions and help them to understand the important concepts through the design process,” said Kim, an associate professor of mechanical engineering.

The competition featured an impressive diversity of robots ranging from the small to the very large. Feliciano Escobedo’s robot "Mushu" was a compact light machine while John Taylor Novak’s "Red Eye” weighed a staggering 12 pounds.

“The diversity in robots reflects the diversity in our students,” explained Winter, an associate professor of mechanical engineering. “Each one is different and shows unique elements of their creators’ personalities.”

Students had to get very creative with their personalities and robots as they are only allowed to use materials provided at the beginning of the semester. “You saw a lot of fancy mechanisms tonight but it all starts with raw scrap materials like aluminum and plastic,” said Kim.

In the end student Mason Massie, a mechanical engineering sophomore, won the competition much to his surprise.  “Honestly, I wasn’t expecting to win at all,” said Massie. “When it got down to it and I started to realize maybe things were turning in my favor, I just tried to keep a cool head.”

Massie designed two robots: the autonomous "Oompa Raiser" and the scissor-lifting "Do You Even Lift, Bro?"  Massie, a member of MIT’s Combat Robotics Club, is already set to participate in an upcoming episode of the Discovery Channel’s show "Battlebots." 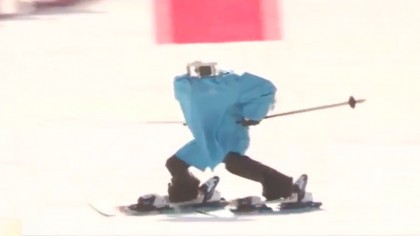 Massie emphasized that he used CAD on his computer to ensure his designs were functional before building them. He also received support from the other 165 students who all built robots even if they were not all finalists.

“Lab was a lot of fun because you would talk to people about their designs and you would give each other pointers,” Massie added. MIT 2.007 Design and Manufacturing I is described as an undergraduate class that "develops students’ competence and self-confidence as design engineers" by emphasizing "the creative design process and the application of physical laws."