A Tesla Model X owner tries to sue the electric car company for $1.1 million for being stuck inside the vehicle because the Falcon wing doors failed to open after a serious head-on collision.

Back in February this year, a couple in Guangzhou, China got involved in a fatal car crash aboard the Tesla Model X they own. The owner and her partner were sitting in the back seat of the car when the head-on collision happened. They struggled to open the Falcon wing doors of the car and got stuck in the back seat as the vehicle started to catch fire. After some panic-thinking, the couple managed to escape through the front door in the nick of time as the car ignited in flames. As a result, Li Tada, the car owner, demanded Tesla for an 8 million Chinese yuan (or around $1 million) for compensation even if they didn't sustain any serious injuries.

Li Tada gave her personal account of the crash through an open letter published by CarTek's WeChat.

Tada explains that she has only used her Tesla Model X for less than three months when the accident happened. The couple's driver, Zheng Chuyu, was speeding at 75 km/h northbound of the Guangzhou highway when the car collided with the road's side rails and went out of control. They then spun 180 degrees and collided head-on with an oncoming Ford Focus.

Just after the collision, the vehicle started catching fire and it was this instance that they tried to open the Falcon wing doors but failed to release. They escaped from the front door just less than 10 seconds before the car started burning up in flames.

Li and her partner were still considerably lucky as they were able to walk after the accident. Although Li was left with her nose fractured, a busted lower lip, and had to get a couple dozen of stitches she was still better off compared to her driver. Zheng Chuyu was seriously injured as the driver's seat airbag failed to deploy during the collision. Chuyu's spinal cord was fractured, his internal organs were damaged and he was hospitalized for more than 40 days. 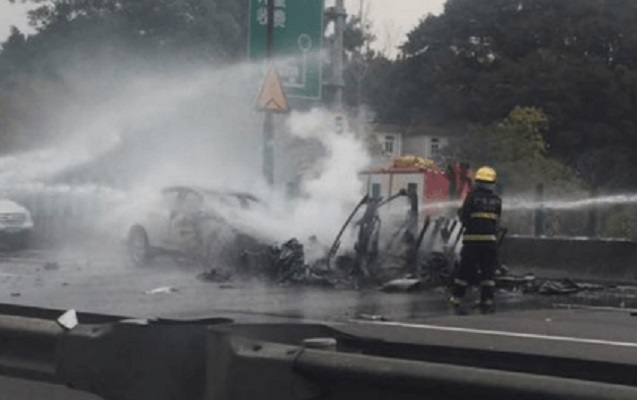 Like any other sophisticated car doors, Tesla’s Model X Falcon wing doors have an emergency latch that can be used in case the button fails to release the doors. However, this information is not contained in the online manual but hides inside the handbook manual that physically comes with the car. Now, let’s not get into a discussion on whose fault it is but it’s just noteworthy to point out that an emergency latch exist.

Tada decided to ask Tesla China for monetary compensation after expressing that the accident still haunts her up until today. “After the accident until today, I often have nightmares I was being burned to death inside the Tesla Model X. I wouldn’t dare ride it again, I would rather use the subway”, says Tada via CarTek’s English translation of her open letter. 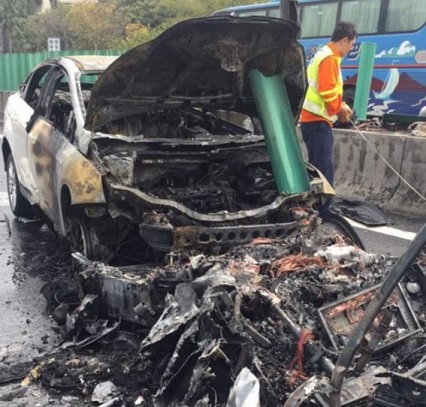 This is what Tesla China had to say about the whole accident.

"First of all, the lives of the owner and passengers were not threaten. We are working closely with the department concerned. The distribution of the debris at the site and the damage all indicate that this was a high-speed crash – in this case, not just electric cars, but any vehicle can catch on fire. In fact, another car involved in the accident (a fuel-powered vehicle) also caught on fire. Fuel tank fire incidents happen much more often than the electric car fires. In addition, Tesla has consistently insisted on the disclosure and transparency of information, including other information about the incident, such as the owner is asking us for 8 million yuan, and we will not accept".

Tesla China is still investigating the accident and working with local authorities to get to the bottom of it all.

Tesla’s worth may exceed $4 trillion by 2030, says analyst