Many scientists take some natural structure as example and try to recreate it mechanically and eventually apply it to industrial manufacturing, medicine, transportation and our every-day-life at all. David Leigh, a professor in the School of Chemistry at the University of Manchester, is one of these scientists, but the special thing here is that he ran his project on a molecular-scale level. Following the mechanism of protein synthesis in each eukaryotic cell, Professor Leigh and his team successfully created nano-scaled machine that uses molecules as building blocks in order to build larger molecules. The device has total length of just a few nanometers, so you can’t see it with “unarmed” eye. The research was published in “Science”.

“The development of this machine which uses molecules to make molecules in a synthetic process is similar to the robotic assembly line in car plants. Such machines could ultimately lead to the process of making molecules becoming much more efficient and cost effective." Professor Leigh explained."This will benefit all sorts of manufacturing areas as many man-made products begin at a molecular level. For example, we’re currently modifying our machine to make drugs such as penicillin.”

The molecular machine uses exactly the ribosome as an example. The core is a molecular track with building blocks located along that track. A nano-ring moves along the axis and picks up those blocks, arranging and bonding them into specific order to build the required molecule.

At first the ring is guided by copper ions. The ring moves along the axis until it reach a bulky group. After that a “reactive arm” starts operations as it detaches the bulk from the track and forwards it to different site on the machine. This regenerates the active site on the arm which allows the ring to move along the axis until it reaches the next building block. The next block is transferred to the same site where the previous block was added, thus elongating the new structure and creating bigger, polymer molecule. When all building blocks are removed from the track, the ring is detached and the building stops. 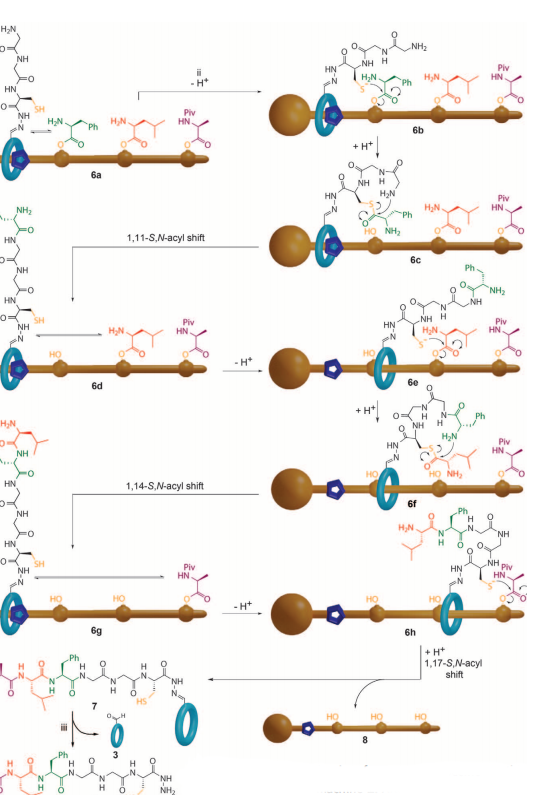 “The ribosome can put together 20 building blocks a second until up to 150 are linked. So far we have only used our machine to link together 4 blocks and it takes 12 hours to connect each block. But you can massively parallel the assembly process: We are already using a million million million (1018) of these machines working in parallel in the laboratory to build molecules.” David Leigh stated. “The next step is to start using the machine to make sophisticated molecules with more building blocks. The potential is for it to be able to make molecules that have never been seen before. They’re not made in nature and can’t be made synthetically because of the processes currently used. This is a very exciting possibility for the future.”