Teams competed in the 48 hour Moog Hackathon to create new electronic instruments based on Moog synths.

Synthesizers’ are the backbone to much of the electronic and pop music produced today. Among the best of these electronic musical instruments are Moog Synths, developed back in the early sixties Dr. Bob Moog, the man credited with creating the world's first commercial synthesizer.

SEE ALSO: 7 FUTURISTIC INSTRUMENTS YOU SHOULD ASK SANTA FOR THIS CHRISTMAS

The future of music is Moog

The hackathon invites students to build their own musical instrument with a Moog synthesizer for cash and prizes. The 48-hour competition is in its fifth year hosted at the Georgia Tech School of Music. 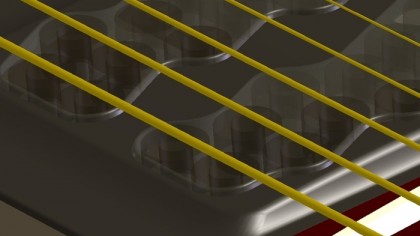 The teams compete for $6,000 in prizes, and the top winner will be automatically admitted as an entrant to the Guthman Competition. This year the winning instrument, was "Mission Control," a three-paneled instrument that requires expert coordination of multiple musicians to create an original sound.

Music pulled out of cars

Second place was won by Mason Mann, Jack Thomson and Krish Ravindranath with their instrument Car Auditory Response System (C.A.R.S.). Their instrument turned to the outdoor environment for inspiration.

C.A.R.S, ‘wirelessly taps into the on board diagnostic port on any car built after 1996 to pull out sensor and performance data to be fed in as parameters to different synthesizer patch algorithms.

A patch using the engine RPM and fuel trim (continuously adjusting fuel mixture), among other parameters, was used in the demo ride, and switches built into the dash were used to modify the patch on the fly.’

Third place of the annual competition was won by the instrument "The Monument." Created by Wenyu Mao, Ning Yang and Yi Wu their instrument was designed as a monument to scientists.

The instrument is formed by eight pillars, inspired by the Waterphone with each pillar representing achievement in the history of electrical science.

Two Moog Werkstatts are used in The Monument: one is for melody and the other is for percussion. Other notable mentions included an instrument worn on the user's head and a Moog synth that was playable by multiple people at the same time from any location.

Competitors had 48 hours to complete the challenge with the full resources of Georgia Tech Invention Studio, a makerspace for the Georgia Tech Community.

The lab has 3D printers, water jets, and woodworking equipment that were taken advantage of to create an impressive array of prototypes in only 48 hours.

The Bleak Future of Petroleum