More than 12 passengers on two separate American Airlines flights arriving from Europe to Philadelphia have reported suffering flu-like symptoms, prompting authorities to notify the Centers for Disease Control and Prevention (CDC). More than 250 passengers and crew members from the two flights have been held in a medical facility as a precaution.

We've released a statement on @AmericanAir flights 755 from Paris and 717 from Munich that arrived today at PHL. While airport operations were not affected, out of an abundance of caution, officials performed medical evaluations and assessments. Statement: https://t.co/l7lL2gQEKy

The two affected flights were Flight 755 from Paris and Flight 717 from Munich. Benjamin Haynes, Centre for Disease Control spokesman said that the passengers are being evaluated for influenza and other respiratory diseases. 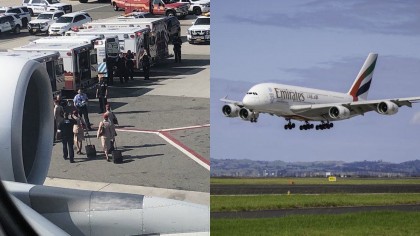 The affected passengers complained of a sore thought and coughing, but none were reported to have a fever. "None of the passengers are severely ill, and they will be released and informed of test results in 24 hours,'' the email said.

"Passengers from the two flights who were not ill continued with their travel plans. We will have more information as test results are confirmed." The passengers began complaining of symptoms after they had exited the plane and were headed to customs American Airlines spokeswoman Leslie Scott explained.

Flu season is fast approaching and the CDC recommends people feeling unwell should not travel. Philadelphia International Airport released a statement saying the passengers were evaluated as "a precaution" and that "Airport operations were not impacted during this time."

The news comes after an Emirates flight heading to JFK from Dubai was quarantined just two days ago. IE will continue to update this story as it unfolds.