Most Americans Are Terrified of Getting in a Self-Driving Car

71% of Americans say they are scared of riding in an autonomous vehicle.

Most Americans are afraid of self-driving cars according to a new report from the AAA. The study shows that rather than getting used to the emerging technology most survey respondents are getting more fearful.

The results from the study revealed a massive 71 percent of Americans say that they’re afraid to ride in a self-driving car, that’s up from 63 percent who responded to a similar survey back in 2017.

The AAA suspect that the reason for the fear is simple; it appears as though self-driving cars are killing people. Last year an autonomous Uber vehicle struck and killed a pedestrian in Arizona. A local judge recently ruled that Uber is not criminally responsible for the incident.

In the same month, a Tesla driver was killed in a crash while their car was reportedly in ‘auto pilot’ mode.

“Automated vehicle technology is evolving on a very public stage and, as a result, it is affecting how consumers feel about it,” Greg Brannon, AAA’s director of Automotive Engineering and Industry Relations, said in a statement.

“Having the opportunity to interact with partially or fully automated vehicle technology will help remove some of the mystery for consumers and open the door for greater acceptance.”

It’s not all autonomous driving scenarios that cause terror tough. According to the survey, 53 percent of Americans say they’re comfortable being inside a self-driving vehicle in low-speed situations at theme parks and airports.

44 percent of respondents say they are also ok with autonomous vehicles being used to deliver food and goods. “There are sometimes dozens of different marketing names for today’s safety systems,” Brannon said.

“Learning how to operate a vehicle equipped with semi-autonomous technology is challenging enough without having to decipher the equipment list and corresponding level of autonomy.”

What can the cars really see?

What’s concerning is that the numbers that express fear about self-driving cars are rising after having previously started to dip. A survey done at the beginning of 2017 showed 78 percent of Americans were afraid to ride in a self-driving car, but that dropped to just 63 percent in late 2017. 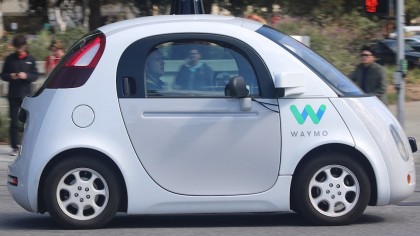 Riding in cars isn’t the only problem if you are a person of color a recent study has shown that an autonomous vehicle is less likely to recognize you as a pedestrian compared to a person with lighter skin tone. Researchers from Georgia Tech investigated eight AI models used in state-of-the-art object detection systems to complete their study.

These systems allow autonomous vehicles to recognize road signs, pedestrians, and other objects as they navigate roads. They tested these systems using two different categories based on the Fitzpatrick scale. A scale commonly used to classify human skin color.

Overall the accuracy of the system decreased by 5 percent when it was presented with groups of images of pedestrians with darker skin tones. And according to the published paper, the models showed “uniformly poorer performance” when confronted with pedestrians with the three darkest shades on the scale.