Excitons might sound like the name of the latest pop band, but in fact, are electrically neutral quasiparticles.

SEE ALSO: 9 INTERESTING MATERIALS THAT COULD SHAPE THE FUTURE

They only exist in semiconducting and insulating materials and can be accessed in two-dimensional (2D) materials just a few atoms thick, such as carbon and molybdenite. Incredibly when these 2d materials are combined they exhibit quantum properties that neither material possesses on its own.

"This tool can be extremely useful for peeking into a material's response at the very first moments light has affected it. Such materials can be used to significantly slow down light to manipulate it or even store it, which are highly sought-after capabilities for communications and for photonics-based quantum computers," Prof. Suchowski explains.

"From the instrument capability point of view, this tour de force opens up new opportunities to visualize and manipulate the ultrafast response of many other material systems in other spectrum regimes, such as the mid-infrared range in which many molecules are found to vibrate."

Understanding the movement of quantum particles will open doors to many other research projects with the lab and beyond.

To complete their work, the scientists developed a unique spatiotemporal imaging technique at the femtosecond-nanometric scale and observed exciton-polariton dynamics in tungsten diselenide, a semiconductor material, at room temperature. 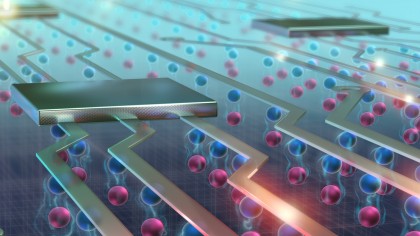 The exciton-polariton is a quantum object formed from a merging of light and matter. Advances in recent years now allow scientists to observe these interactions in higher spatial and temporal resolution than ever before.

Haim’s Femto-Nano Laboratory works to merge the extreme resolution capabilities of space and time in order to observe spatiotemporal ultrafast dynamics at the nanoscale. The lab is particularly interested in ‘exploring the ultrafast hot electron dynamics and related nonlinear effects in plasmonic nano-structures and metamaterials.’

Haim says the lab's current goal is to ‘understand the effect of the nanoparticle geometry and environment on the spatio-temporal hot electron evolution and its relation to nonlinear optical generation.’

Haim and his lab members are motivated by the goal to combine theoretical microscopic models with novel experimental measurement methods, they have been known to do work that includes pulse-shaping based measurements, ultrafast pump-probe spectroscopy, ultrashort light sources, and near field microscopy.

In a Ground-Breaking First, Physicists Manage to Hold Individual Atoms