MSG Makes Food Taste Delicious, but Is It Actually Safe?

What you have probably heard about Monosodium glutamate is not based on science. MSG may even be a great way to elevate your cooking.

What do you know about MSG? Monosodium glutamate or MSG, has had a bad rap for years. Yet, the naturally occurring amino acid is commonly found in a lot of your favorite snacks and treats, occasionally even used at restaurants. But let’s back up for a second. Many people outside of the United States may be unaware of MSG for a specific reason - Americanized Chinese food.

Those who have eaten these foods have fallen in love with the savory and almost addictive “extra-flavor” found in these dishes.

However, occasionally, those who have eaten at these Chinese food restaurants have complained about feeling weird or even "off" after eating their favorite dishes, blaming one single culprit: monosodium glutamate.

MSG is commonly used to enhance flavors in popular American Chinese dishes. ( as well as Vietnamese, other American dishes, Indian, Africans, etc.). For decades people have associated these restaurants with MSG, creating the myth that MSG is a horrible chemical that is bad for you, an idea that is probably based on spread prejudice.

Today we are going to look to science to explain everything that you need to know about Monosodium glutamate, showcasing that it is much more common than you think and that it could even make your dishes taste even more delicious.

Where the MSG hate all started

In the early 1960s, America was on a witch hunt to eliminate chemical additives. MSG’s chemical nature would eventually make it a target. However, the story does not stop there.

A paper published in 1968 by a doctor who experienced radiating pain in his arms, weakness, and heart palpitations after eating at Chinese restaurants pointed to MSG as the potential cause of his health issues. Other “research” on MSG and the effect on the body after eating at a restaurant would go on to create what would eventually be known as Chinese Restaurant Syndrome.

Later, re-evaluations of these "studies" would eventually highlight that they were flawed. Papers like ‘That Won-Ton Soup Headache’: The Chinese Restaurant Syndrome, MSG, and The Gluten Lie: And Other Myths About What You Eat by Alan Levinovitz have chronicled MSG’s negative effects on one’s health as a myth. Even the FDA has gone on to say that MSG is generally safe.

People who have horrible side effects after eating MSG in Chinese food have been said to experience the nocebo effect. This weird phenomenon occurs when suggesting that something can cause a negative reaction that eventually causes those physical symptoms.

Even though there are countless studies that have pointed to MSG being safe, with top chefs speaking publicly about its use, the MSG myth still persists. If you still believe this even after the research, you are missing out. MSG is a powerful flavor enhancer that can make your dishes taste much more delicious.

In short, MSG is a popular food enhancer that is taken from the naturally occurring amino acid L-glutamic. Also known as sodium glutamate, it is the sodium salt of glutamic acid, which is one of the most abundant essential amino acids in nature. You can find glutamic acid in a range of your favorite foods, like tomatoes, parmesan, and dried mushrooms.

As mentioned above, you can go out and purchase a bag of monosodium glutamate and use it at home. The food additive can be used to make your poultry, soup, and fish dishes much better. Adding the beloved umami flavor, some have argued vegetarians and vegans should consider using MSG, as it could elevate their dishes.

MSG really does make a dish taste delicious, and countless blind taste tests have proven it to be true. However, it does not taste good by itself. Just like a sodium-based seasoning, you add it to the things that you eat, with a little bit going a very long way. 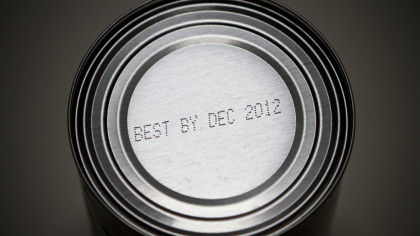 Is Expired Food Safe to Eat?

You will also find Monosodium glutamate used in fast-food restaurants, in your favorite over the counter chips and snacks, in seasoning blends, frozen meals, soups, processed meats, and instant noodle products.

It is important to note here that MSG also gets a bad rap because it is used in a lot of unhealthy foods, which have led some to believe that there is a correlation between MSG and negative health effects. However, a lot of the products that incorporate MSG tend to be highly processed and high in sodium and fat.

Whenever I make fresh 🍿 ...I season with salt, little black pepper and a sprinkle of MSG...shake vigorously...never fails to impress.

If anyone gives you shit about MSG just give them a bag of Doritos. Works every time! pic.twitter.com/OLWMtcMqh2

Where does MSG come from?

As mentioned above, glutamic acid is one of the most abundant essential amino acids in nature, even occurring in breast milk. However, MSG was discovered by a Japanese chemist. Back in 1907, the chemist Kikunae Ikeda was exploring a shared quality between foods like tomatoes, asparagus, and his wife’s beloved broth with seaweed, and umami flavor.

For the uninitiated, umami plays a vital role in the science behind the foods we eat every day. This pleasant savory taste is considered to be one of the five basic tastes, alongside sweet, bitter, salty, and sour. Present-day chefs around the world look for natural ways to pack their dishes with this savory flavor. Aged cheeses, tomatoes, green tea, kimchi, and seaweed all feature this flavor profile.

As mentioned in a paper published in BioMed Research International, “For those who are just starting to understand umami, it is important to see the unique characteristics of umami in view of five basic tastes. When we eat foods, our taste perception begins on the tongue. The tongue is such a small organ but has an ability to pick up the tastes of sweet, salty, sour, bitter, and umami through specific receptors. This information is then sent to the brain through nerves to help us recognize the taste of the food we eat.”

But why? What causes this umami flavor? Upon further inspection, Ikeda discovered that these dishes shared glutamate or the ionic form of glutamic acid. Ikeda would then later go on to figure out how to synthesize the molecule by extracting glutamate from seaweed and mixing it with water alongside table salt to stabilize the compound. The crystallized compound became a hit and is still used in kitchens today.

“As with all of the basic tastes, the amino acid glutamate is one of the predominant ingredients that triggers umami taste receptors.”

Should I add MSG to my cooking?

Yes, but only in small amounts. MSG is very potent and just a small bit of it can go all the way, with some arguing that it is a better alternative to salt in some dishes. In fact, MSG only contains one-third the amount of sodium as the table salt sitting on your counter right now. You can use MSG to reduce the amount of sodium in a recipe by 20 to 40% while maintaining an enhanced flavor. Even more so, the compound is one of the most extensively researched substances in the food world and is even beloved by chefs around the world.

Chefs of prominent and globally recognized restaurants like Grant Achatz of Alinea and David Chang of Momofuku have gone on to share similar sentiments saying that MSG is misunderstood and can be a powerful tool in the kitchen. There are even multiple videos across the web of talented home chefs using MSG in dishes that you can easily follow along to if you need some inspiration (check out the videos above).

@davidchang posted this yesterday and I was frankly stunned at the response. MSG is safe and I use it everyday, and have for years. No one ever complains about headaches or dizziness from the thousands of foods Americans eat all the time that are loaded with it. And the culinary racism surrounding this product dates back to a debunked article from decades ago in the NEJM. By using a 2:1 ratio of salt/msg in my kitchen I have cut down on 33% of my salt intake. Glutamates are what makes food taste good. MSG in a real sense is umami. Love that he used the @ajinomotonorthamerica brand. My fave.

Food scientist Steven Witherly uses it all the time, even using the “super salt” to help his children eat a little bit healthier. “I use it a lot," he told Business Insider. "I like to encourage my kids to eat a little healthier, so I'll sprinkle a little superset in there. That stuff is really powerful. For example, I had a whole-wheat pizza — and my kids hate whole wheat — so I put a little super salt in the tomato sauce, and they sucked that whole thing down," said Witherly.

"Broccoli is tremendous if you add butter, garlic, and super salt," he said. "Most savory dishes, most meat dishes, a little bit helps...MSG can temporarily affect a select few when consumed in huge quantities on an empty stomach, but it's perfectly safe for the vast majority of people."

So to answer your question. Yes, MSG is safe to use. There have been some small studies that have pointed to the potential correlations between MSG and obesity. Yet, larger, well-designed studies are needed to confirm this potential link. Like any cooking seasoning, when used in moderation, MSG could be a great way to improve your cooking.

Do you use MSG in your cooking? Would you recommend adding it to dishes? Please leave your ideas below in the comments.