Elevators changed how people moved around buildings when they were first designed around 160 years ago. However, since then the design of them hasn't changed all that much as they can still only travel up and down in mechanical fashion in a vertical shaft. ThyssenKrupp hopes to change this with an elevator that would look right at home in Willy Wonka’s chocolate factory. They have designed a concept of an elevator that would be able to move several cabins around a building vertically and horizontally. If the concept comes to fruition we could see testing of the system in 2016. 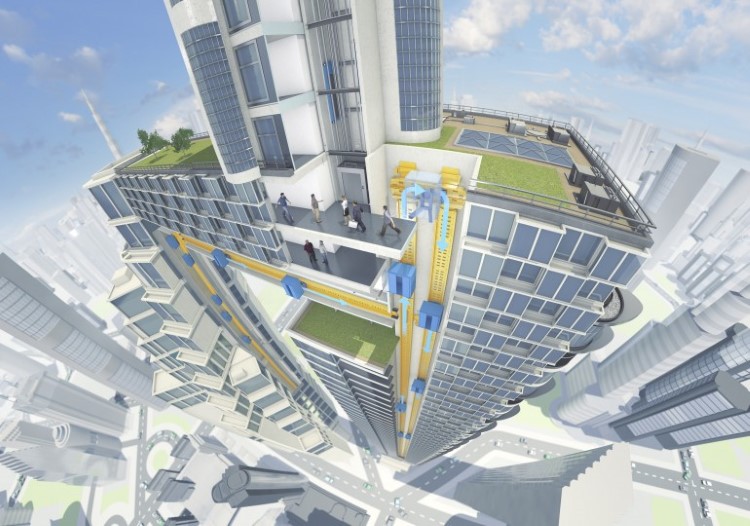 The new elevator design is simply called the Multi and it will be the first elevator in the world that would work without cables. There is more to the system than simply doing away with the cables that typically make the elevator travel up and down the shaft. It would change the way that people get around in tall buildings and make life much easier.

The Multi elevator would have a magnet based drive, similar along the lines of the Maglev train. Each of the elevators will have one motor for moving it horizontal and another for moving it vertical. There would not be just the one vertical shaft for the elevator to travel in, there would be a complex system of shafts both vertical and horizontal. This would mean that people waiting would have to wait no longer than 15 to 30 seconds to get on the elevator.

The Multi would be more space efficient than the typical elevator as the shafts could be smaller. The usable space in a building would benefit from an extra 25%. The elevators would be made in materials that were lightweight; the designers believe that they can shed around 50% off the weight of that of today's elevators.

The company are hoping to test the technology in a building of around 300m tall, which would be ideal. At the moment, the Multi is still in the development stages and if all goes to plan, testing will start in 2016.

Skyhooks Might Just Make Rockets a Thing of the Past