The Buffalo Science Museum has discovered a rare elephant bird egg specimen hidden among its collection.

The Buffalo Museum of Science has discovered an intact elephant bird egg previously mislabelled as a model. The now extinct elephant bird Aepyornis maximus was one the largest birds to have ever lived.

Its eggs are among the largest known eggs, bigger than most dinosaur species and significantly larger than modern bird eggs. The museum records show the egg was purchased in 1939 and incorrectly labeled as a model used to show visitors how big the elephant bird's eggs would have been.

This small piece of human error meant the egg was misidentified for more than seventy years. Recently the collections manager of the museum, Paige Langle, re-examined the egg, suspicious of the realistic look of the model.

Langle compared it to another model and found the mystery egg to be radically different. To investigate her suspicions Langley had the egg radiographed.

The results showed that not only was it a true elephant bird egg specimen, the egg had been fertilized and contained a semi-developed baby bird inside. Now the true identity of the egg has been revealed, the Buffalo Museum of Science is the proud owner of one of just 40 intact specimens.

Correctly labelled egg to go on display from May 1

“Lost, hidden or misidentified artifacts and specimens are not uncommon in museums that have been collecting for centuries, and we are thrilled to rediscover this rare egg in our collection,” Buffalo Museum's Director of Collections, Kathryn Leacock, told local news.

Elephant birds lived in the forest of Madagascar until about 800 years ago when they were declared extinct. The title of elephant birds covers seven species related to modern emus and cassowaries.

The species to which the egg belongs, Aepyornis maximus, was capable of growing up to 3 meters (9.8 feet) high and weighing as much as 500 kilograms (1,100 pounds). Its eggs matched its body size, the largest known specimen is 33 centimeters high.

Human consumption of Aepyornis maximus eggs is likely to have been a contributing factor in the bird's extinction. One egg was said to have contained the same volume as 150 chicken eggs. 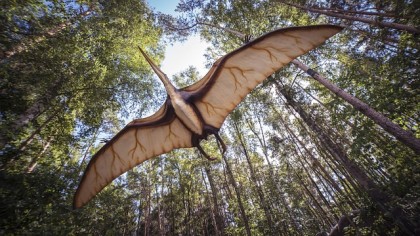 The shells of the eggs were used as bowls and vessels by Malagasy people. Specimens of the eggs are so rare and sought after that documentary maker David Attenborough made a film about his quest to find one, which resulted in him creating a specimen from broken pieces of shell that he glued together.

Two other specimens were miraculously found in sand dunes on the coast of Western Australia. Experts believe the eggs must have got there after floating across the Indian Ocean.

Scientists Are Trying to Revive Woolly Mammoths With CRISPR