Osmotic power is electricity which is generated from the difference in salinity between river water and sea water, and is found in its most viable energy-engendering state at the mouths of rivers. The global power capacity or "salinity gradient" has been estimated by engineers to be anywhere from 1600 to 1700 TWh annually. Osmotic power is a clean and "sustainable" energy source which has remained almost entirely untapped due to gross inefficiency with commercial production.

A team of physicists from the Institut Lumière Matière in Lyon (CNRS / Université Claude Bernard Lyon Une) and collaborators from the Institut Néel (CNRS) has developed an experimental device that the researchers say is 1,000 times more efficient than any previous osmotic power generation system, and if this holds true then osmotic electricity generation will become commercially viable.

Making use of an electrically insulating membrane which only allows the passage of ions in order to engender an electric current to separate a salt water and a fresh water reservoir, the team pierced one hole in it and through this hole inserted a boron nitride nanotube. This tube's external diameter was a mere few dozen nanometers.

Using electrodes, the team measured and found an electric current passing through the nanotube on the order of one nanoampere. This would mean that boron nitride nanotubes are an extremely efficient solution for harvesting the energy of salinity gradients, which can be immediately converted into usable electricity.

When they extrapolated their results to calculate on a larger scale, they determined that a single m2 boron nanotube membrane should have a capacity of approximately 4 kW, making it capable of generating up to 30 MWh per year -- three orders of magnitude greater than that of the prototype osmotic power plants that fill the blueprints at the time of this writing. 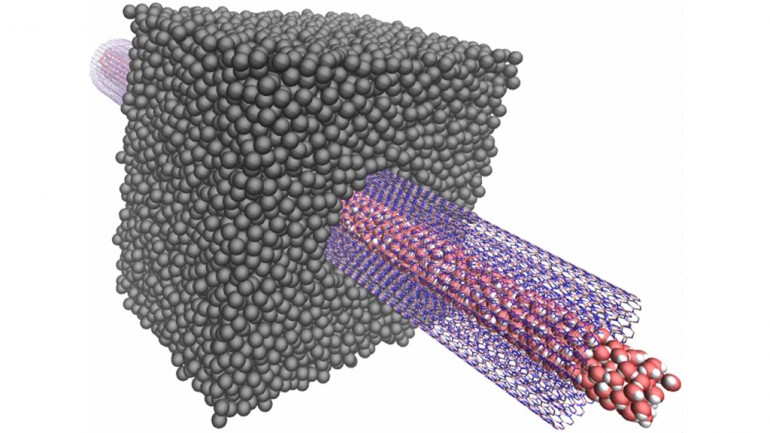