A Canadian startup could have a new breakthrough in pulling moisture from the driest of places. For years, researchers around the world have been looking for new technology and methods of making drinkable water out of the atmosphere.

The company Awn Nanotech, based out of Montreal, have been leveraging the latest in nanotechnology to make that water harvesting a reality. Awn Nanotech, most recently, released new information about their progress at the American Physical Society's March meeting -- the world's largest gathering of physicists.

Founder Richard Boudreault made the presentation, who is both a physicist and an entrepreneur with a sizeable number of other tech-based startup companies under his belt. He said the company got its inspiration after hearing about the water crises in southern California and South Africa. While most others were looking to solve the problem by desalination techniques and new technologies, he wanted to look to the sky instead.

He also wondered if he could create a more cost-efficient alternative to the other expensive options on the market. By tapping into nanotechnology, he could pull the particles toward each other and use the natural tension found in the surface as a force of energy to power the nanotechnology itself.

Boudreault partnered with college students throughout Canada to develop a specific textile. The fine mesh of carbon nanotubes would be both hydrophilic (attracts water to the surface) on one side and hydrophobic (repels water away from the surface) on the other.

Water particles hit the mesh and get pushed through the film from one side to the other. This ultimately forms droplets. 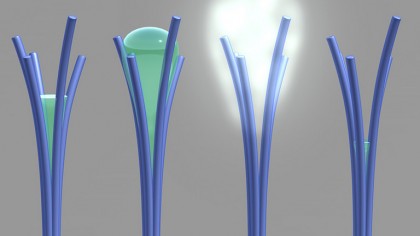 "Because of the surface tension, (the water) finds its way through," Boudreault explained. The water then gets consolidated into storage tanks as clean water where it can await consumption. While there's no need for power with the system, the Awn Nanotech team realized they could significantly speed up the water harvesting process by adding a simple fan. The team quickly added a small fan of a size that cools a computer. To make sure the fan also kept energy usage low, the fan itself runs on a small solar panel.

There have been some other attempts around the world to scale up water harvesting technology. In April 2017, a team from MIT partnered with University of California at Berkeley to harvest fog. They turned their attention to already very moist air and created a much cheaper alternative to other fog-harvesting methods using metal-organic frameworks.

However, unlike the small frameworks developed by the MIT researchers, Boudreault said that they've quickly scaled up their technology. In fact, the Awn Nanotech team has already created a larger alternative to their smaller scale that can capture 1,000 liters in one day. They're currently selling their regular-scale water capture systems for $1,000 each, but the company intends on partnering with agricultural companies and farms for the more extensive systems.