NASA and Uber have signed a second space act agreement to explore the safety and efficiency of future air mobility programs in crowded urban areas.

“NASA is excited to be partnering with Uber and others in the community to identify the key challenges facing the UAM market, and explore necessary research, development and testing requirements to address those challenges,” said Jaiwon Shin, associate administrator for NASA’s Aeronautics Research Mission Directorate. "Urban air mobility could revolutionize the way people and cargo move in our cities and fundamentally change our lifestyle much like smart phones have."

The new agreement will see Uber share data related to its flying taxis program, set to be launched by 2023, with the space agency. The program will take place at NASA’s research facility at the Dallas Fort Worth (DFW) International Airport.

The space agency will use the data supplied by Uber to created simulations of possible UAM scenarios such as a passenger-carrying aircraft flying through DFW during peak air traffic conditions. The simulations will then be analyzed to identify and adapt to potential safety and efficiency issues.

In the meantime, Tuesday also saw Uber unveil its concept airborne taxi at its second annual Uber Elevate Summit. The flying cars are designed to be safer than helicopters and fly 1,000 to 2,000 feet above ground.

The airborne vehicles are set to be piloted at first but eventually will operate autonomously. More impressively, officials have stated they will be quieter than a truck driving by.

This should make the space agency happy as NASA said in its statement it wants to ensure small aircraft enter the marketplace “safely, with acceptable levels of noise, and without burdening the current national air traffic control system.” The agency added that it is leveraging ongoing aeronautics research, such as Unmanned Aircraft Systems and UAS integration in the National Airspace System, to achieve its vision. 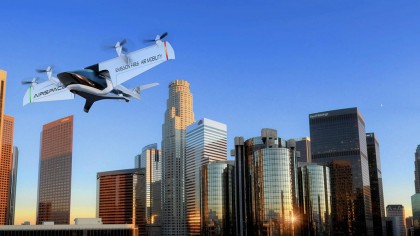 The new agreement is also set to support the introduction of industry standards and regulations and will see all research made available to the broader UAM community. This is good news considering the UAM community is constantly growing.