NASA researchers have just announced that they've found possible life-sustaining conditions on two lunar bodies within our solar system. Saturn's moon Enceladus has hydrogen coming from the plume of its sea floor, enough so to make NASA scientists look into the possibility of microbes living on Enceladus. Jupiter's moon Europa is giving evidence of similar traits. 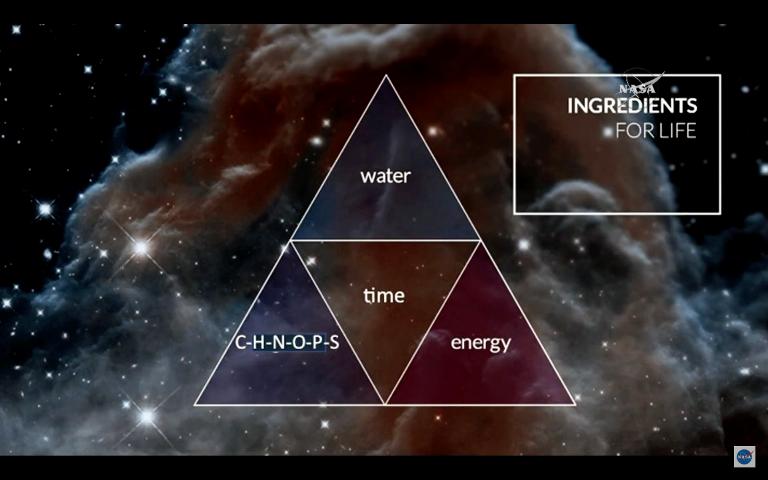 The research is the closest NASA researchers have ever come to determining whether the ocean worlds within our solar system can sustain life outside of Earth's oceans.

"This is the closest we've come, so far, to identifying a place with some of the ingredients needed for a habitable environment," said Thomas Zurbuchen, associate administrator for NASA's Science Mission Directorate at Headquarters in Washington. "These results demonstrate the interconnected nature of NASA's science missions that are getting us closer to answering whether we are indeed alone or not."

This illustration shows Cassini diving through the Enceladus plume in 2015. New ocean world discoveries from Cassini and Hubble will help inform future exploration and the broader search for life beyond Earth. [Image Source: NASA/JPL-Caltech]

The announcement came as a part of a bicoastal live stream event to accommodate the various teams' findings. The Saturn research came thanks to the Cassini mission -- one that has been studying Saturn and its moons like Enceladus and Titan for over 13 years. The Jupiter information comes largely from the Hubble telescope.

The Cassini team reported first on the livestream event. The findings, published in the journal Science, indicates that hydrogen gas which could provide a key chemical source to life, has been found on the subsurface ocean of Enceladus. The finding of hydrogen in the plume goes out into space rather than being trapped in Enceladus's surrounding area. The hydrogen is coming from inside the moon, according to the Cassini team's findings. 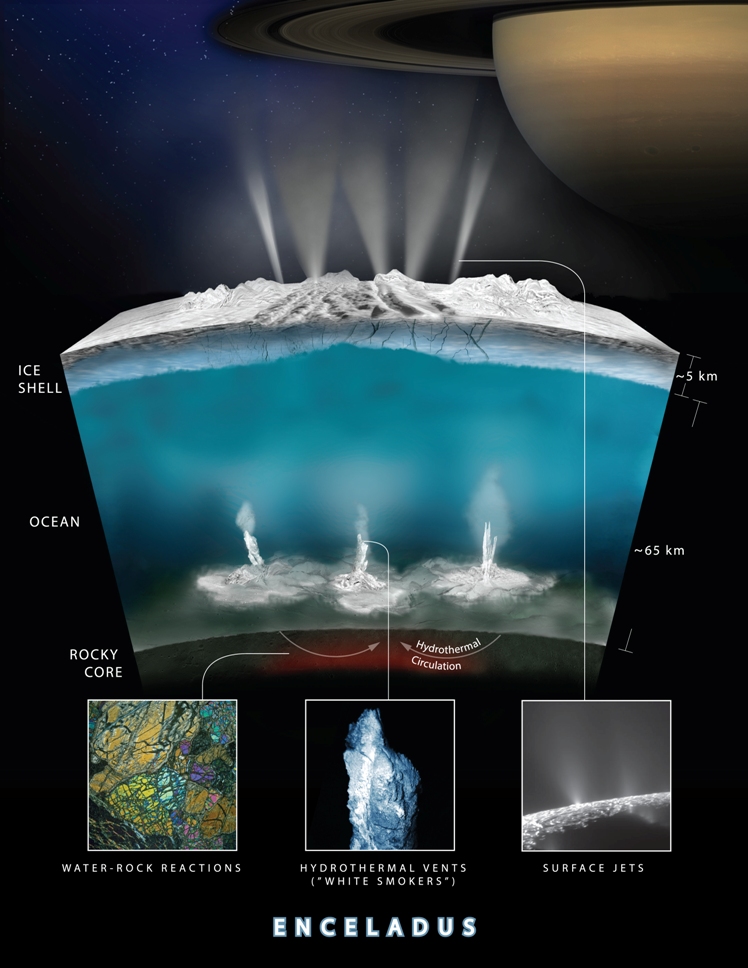 Hydrogen could be a potential source of chemical energy to sustain microbes living in the moon's ocean. The hydrogen is coming from inside the moon, according to Mary Voytek, Senior Scientist for Astrobiology at NASA Headquarters. Those hydrogen-spewing vents could mean sustaining microbes as similar vents on Earth sustain extremophiles in the darkest parts of oceans. However, the Cassini team has yet to find life yet.This graphic illustrates how Cassini scientists think water interacts with rock at the bottom of the ocean of Saturn's icy moon Enceladus, producing hydrogen gas. [Image Source: NASA/JPL-Caltech]

"We haven't discovered evidence of organism on Enceladus, but I'm encouraged by the geochemical data that could create this possibility," said Chris Glein, Cassini INMS team associate at SwRI. 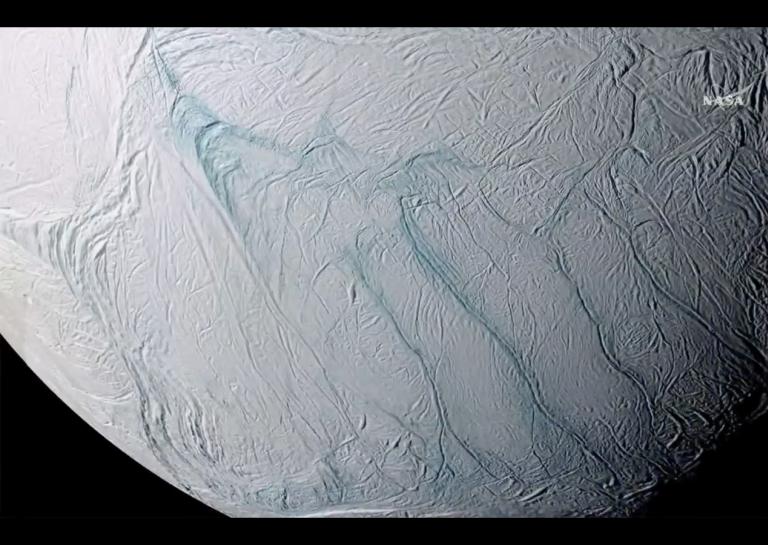 Glein mentioned that the team could take the first-ever calorie count of another planet. He said the equivalent "of the Enceladus findings is like 300 pizzas per hour in energy content."

However, this doesn't dampen the mood of the researchers.

"We got very excited because we immediately thought of what the possibilities could be," said Hunter Waite Cassini Ion and Neutral Mass Spectrometer team leader.

Cassini has until September of this year to gather more information about Enceladus and the presence of hydrogen.

The Europa findings come from Hubble images of a plume found in 2014. However, the potential similarities between Europa and Enceladus led the Hubble team to reevaluate the images.

"The plumes on Enceladus are associated with hotter regions, so after Hubble imaged this new plume-like feature on Europa, we looked at that location on the Galileo thermal map. We discovered that Europa’s plume candidate is sitting right on the thermal anomaly," said William Sparks of the Space Telescope Science Institute in Baltimore, Maryland. Sparks led the Hubble plume studies in both 2014 and 2016.

These composite images show a suspected plume of material erupting two years apart from the same location on Jupiter's icy moon Europa. Both plumes, photographed in UV light by Hubble, were seen in silhouette as the moon passed in front of Jupiter.[Image Source: NASA/JPL-Caltech]

Sparks noted, in a question and answer interview with the press, noted that Europa's discovery also took a bit longer due to the plume's inconsistencies in relation to Hubble's location. Of the 12 moments the telescope when to observe the moon, the team only found plumes twice. The team said they were very lucky to find a repeating plume, especially at an equator.

"We're still at the limits of what Hubble can do, but we're growing in confidence," he said. 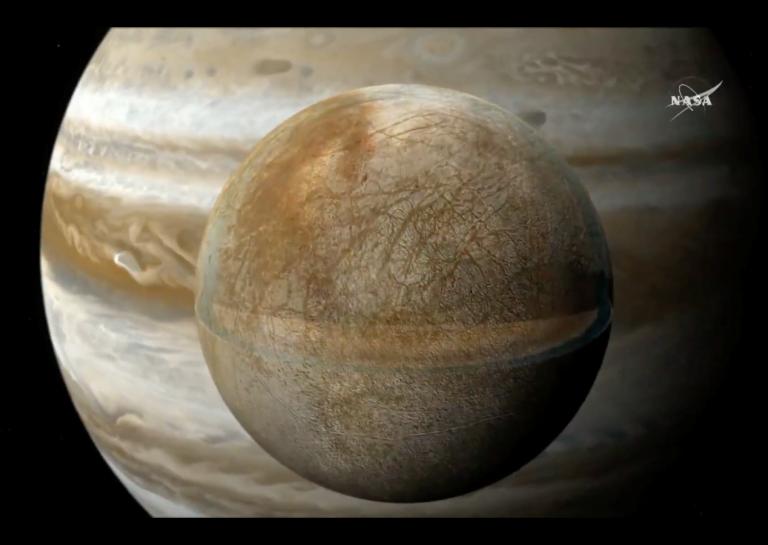 The findings from the Hubble team were published in The Astrophysical Journal Letters.

What's Next For Ocean Worlds Exploration

"If there are plumes on Europa, as we now strongly suspect, with the Europa Clipper we will be ready for them," said Jim Green in a press release, Director of Planetary Science, at NASA Headquarters.

Green expanded on his hope during the press conference:

"We're pushing the frontiers, finding new environments, looking at events in a way we never thought possible before in order to see environments in our solar system that might harbor life."

"First, it helps us understand and improve life on earth. It also provides fundamental research to understand new processes. Thirdly, it helps answer the fundamental question that has filled the thinking of so many in the past -- 'is there life elsewhere?'"

Between this announcement and NASA's previous reveal of seven new exoplanetary bodies, the search for life outside of Earth certainly looks promising.