NASA Announces Small Asteroid is 'Caught in a Dance' with Earth

NASA just announced the discovery and new arrival of an asteroid who's orbit around the sun causes it to orbit Earth as well. This 'mini-moon' is smaller than 100 meters in diameter and was first spotted on April 27th of this year by researchers at the Pan-STARRS 1 asteroid survey telescope on Haleakala, Hawaii. Named 2016 HO3, this tiny asteroid is considered a 'quasi-satellite', or as NASA calls it, a near-Earth companion. The short video below will take you through a little more about 2016 HO3.

"Since 2016 HO3 loops around our planet, but never ventures very far away as we both go around the sun, we refer to it as a quasi-satellite of Earth." ~ Paul Chodas, manager of NASA's Center for Near-Earth Object (NEO) Studies

This tiny asteroid orbits the Sun, but at nearly the same speed and distance as the Earth. 2016 HO3's orbit is slightly off, however, which causes it to follow Earth around the Sun at the same time orbiting our home planet. In certain phases, it passes between the Earth and the Sun, and in other phases the Earth passes between the Sun and it, according to Science Alert. NASA explains it best in the following statement.

"In its yearly trek around the sun, asteroid 2016 HO3 spends about half of the time closer to the sun than Earth and passes ahead of our planet, and about half of the time farther away, causing it to fall behind. Its orbit is also tilted a little, causing it to bob up and then down once each year through Earth's orbital plane. In effect, this small asteroid is caught in a game of leap frog with Earth that will last for hundreds of years." ~ NASA/JPL 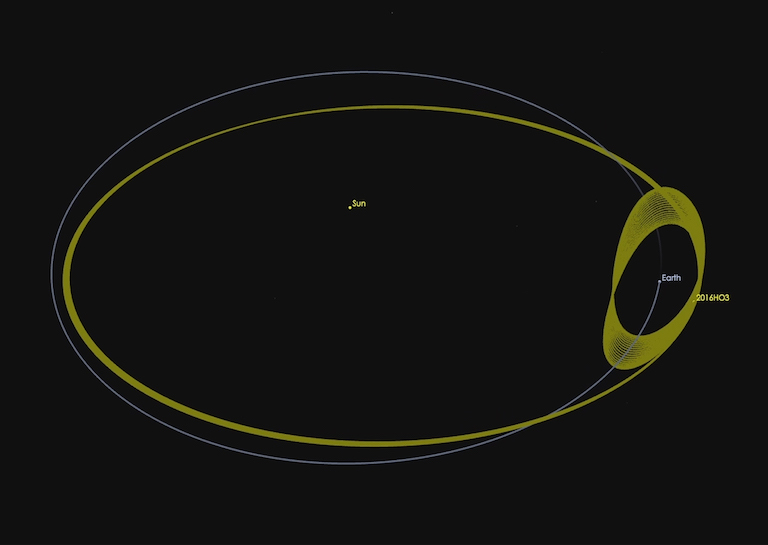 The orbit of 2016 HO3 is 365.93 days, according to Futurism, which due to the closeness to Earth's 325.25-day long orbit, is part of what causes HO3 to orbit the Earth. It looks like Earth is going to have an asteroid friend for a little while too, as estimates project that it will be a stable satellite for centuries to come.