NASA Will Beam One Lucky Person's Tweet Into Interstellar Space

To commemorate the Voyager mission's 40th year anniversary of traversing through space, NASA is inviting the whole world to participate in tweeting their message to the spacecraft. In the spirit of the Voyager's Golden Record, anyone can submit their personal message to the spacecraft and to the unknown worlds that lie beyond the Voyager. NASA will beam the chosen message across to interstellar space on the day of the Voyager 1's 40th-anniversary launch on the 5th of September.

One of the most interesting tweets we've seen people respond with is this one saying "Don't forget your towel!" Any hardcore sci-fi fan would know what this means. It refers to Douglas Adams' The Hitchhikers Guide To The Galaxy and if you've read the book you'd know that a towel is the only thing you need in order to survive space (fictionally, of course).

Everyone has heard of the Voyager mission at least once in their life. But what makes this mission so special? Why are the two Voyager spacecraft so significant in terms of space exploration? And how exactly did they manage to withstand the harsh environmental conditions of space? To appreciate the great importance of the Voyager mission, let's have a look at some of their significant achievements so far.

Throughout the span of 40 years of exploring space, only a few number of missions could match the outstanding heights the Voyager spacecraft have achieved. Since its launch in 1977 up until the 1990s, the Voyager 2 is the very first spacecraft to fly past all four planets of the outer solar system (Jupiter, Saturn, Uranus, and Neptune). Both Voyager 1 and Voyager 2 were the first to discover new moons of the four planets located at the outer solar system. 3 new moons were discovered in Jupiter, 4 at Saturn, 11 at Uranus, and 6 at Neptune. Voyager 1 was also responsible for detecting the nitrogen-rich atmosphere of Titan (Saturn's moon), which is similar to that of the Earth's atmosphere. On the other hand, Voyager 2 became the first ever spacecraft to image the mysterious rings of Jupiter, Uranus, and Neptune. Collectively, the two spacecraft were the first to provide hints of a potential ocean located outside of Earth.

According to NASA, Voyager 1 has reached a region in the universe where no spacecraft has gone before.

"After Voyager 1 departed from Saturn in November 1980, it began a journey to where no human-made object had ever gone before: the space between the stars. On August 25, 2012, it crossed over into interstellar space, leaving behind the heliosphere -- the enormous magnetic bubble encompassing our Sun, planets and solar wind".

Voyager 2 is also on a mission to reach interstellar space and is currently faring its way to the dark and unknown region of the universe. 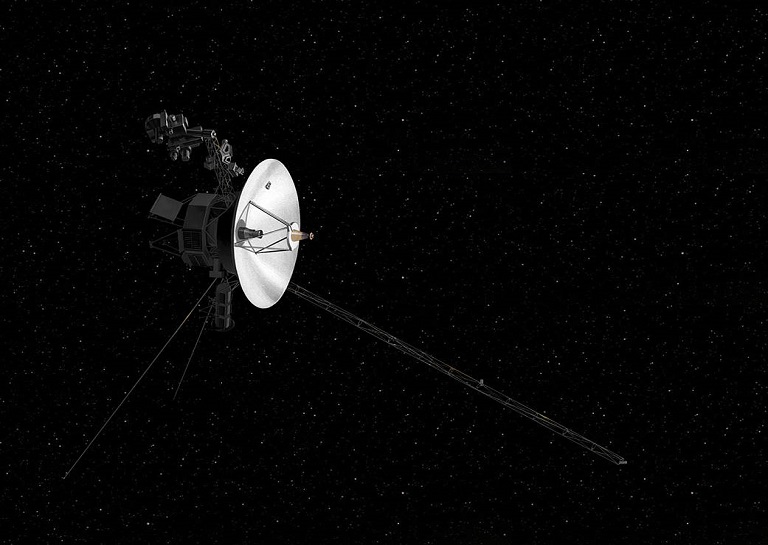 If you have any messages for Voyager and to everything else that lies beyond the spacecraft, you can tweet your thoughts with the hashtag #MessageToVoyager. The submission deadline for any messages to Voyager is on the 15th of August, which will then be filtered by NASA and will go through a public vote. The chosen message will be beamed into interstellar space by NASA on the 5th of September, the actual day of Voyager 1's 40th-anniversary launch.