NASA and Blue Origins reach agreement clearing the company to use the historic test stand that once held Saturn 5 rocket.

NASA and Blue Origin have reached an agreement giving the private commercial space company access and permission to test their rockets at the historic Test Stand 4670, the site that saw the development of the Saturn V rocket.

Blue Origin to Use Historic Test Stand to Develop Its Rockets

In a statement this week, NASA announced that they and the private commercial space company Blue Origin (BO) have signed an agreement granting access to the historic Test Stand 4670 at NASA’s Marshall Space Flight Center in Huntsville, Alabama, which saw the development of the Saturn V rocket that sent the Apollo astronauts to the moon.

According to the Commercial Space Launch Act agreement, Blue Origin will undertake necessary upgrades and refurbishment of Test Stand 4670, which has been inactive since 1998, in order to support the testing of two of the company’s rocket engines, the BE-3U and the BE-4.

The BE-4 rocket engine has been incorporated into United Launch Alliance’s Vulcan rocket and it also powers Blue Origin’s New Glenn launch vehicle, both currently under development.

“This test stand once helped power NASA’s first launches to the Moon, which eventually led to the emergence of an entirely new economic sector – commercial space,” said Jim Morhard, Deputy Administrator for NASA. “Now, it will have a role in our ongoing commitment to facilitate growth in this sector.”

Today in 1965, all five F-1 engines built for the Saturn V rocket were tested for the first time, rocking @NASA_Marshall and the city of Huntsville, Alabama. pic.twitter.com/D4UC6aMB13

Built in 1965 at the height of the space race, Test Stand 4670 was the site of much of the Saturn V’s propulsion tests as part of the Apollo program, eventually leading to the successful US effort to put a man on the moon, which celebrates its 50th anniversary this year.

Operating until 1998, it continued to serve the needs of the US space program by supporting the propulsion tests of the Space Shuttle’s external tank and main engine propulsion system. Since then, though, the site has sat unused for more than two decades.

In a review of underutilized facilities, NASA officials identified the 300-foot tall Test Stand at NASA’s Marshall Space Flight Center as a site that could be put to use. In 2017, they posted a notice of the site’s availability to measure private sector interest. BO reached out to NASA about the site and after a team was commissioned to explore a potential deal, Blue Origin and NASA entered into an agreement this week to bring the site back into active use testing Blue Origin’s rocket engines. 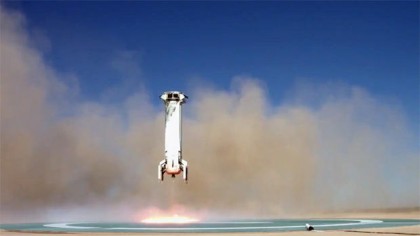 “We’re excited to welcome Blue Origin to our growing universe of commercial partners,” said Jody Singer, Director of the Marshall Center. “This agreement ensures the test stand will be used for the purpose it was built.”

Blue Origin, for its part, welcomed the chance to help restore some the heritage sites of the US space program. “I am thrilled about this partnership with NASA to acceptance test both BE-4 and BE-3U engines at Test Stand 4670, the historic site for testing the Saturn V first stage and the space shuttle main engines,” said Bob Smith, Blue Origin CEO. “Through this agreement, we’ll provide for the refurbishment, restoration and modernization of this piece of American history – and bring the sounds of rocket engines firing back to Huntsville.”