NASA engineer Kristyn Johnson is working with her team to develop a suit that can handle astronauts living inside of it for six days -- including waste disposal.

By  Shelby Rogers
Feb 23, 2018
In 2015, NASA debuted the EMU spacesuits. Three years later, these suits are undergoing yet another change. NASA

The latest innovation from NASA has nothing to do with propelling people to Mars but making sure they're comfortable while they travel. More specifically, NASA engineers wanted to improve upon going to the bathroom in space.

These new suits would allow astronauts to urinate, defecate, and other bodily functions comfortably and safely in their suits for up to six days without a change of clothes.

They're being dubbed the Orion Crew Survival Systems Suits (OCSSS), and "survival" is in the title for good reason. NASA built the suits with emergency situations in mind. The biggest emergency for these suits? If the Orion capsule depressurizes and the team has to remain in their suits to survive, how will they go to the bathroom? Orion will come with a toilet, but NASA wanted to develop this backup suit just in case.

NASA engineer Kristyn Johnson currently leads the development of the internal systems of Orion's launch and the landing suits.

"That's a really long time," she said, "but then to live in a suit with all of your waste right by you for that long of a time, it could get gnarly pretty quickly."

Given the close quarters in space and the enclosed nature of space-based facilities and equipment, "gnarly" is the last adjective any astronaut wants to use to describe their living situations. Bacteria and potential for infection get considerably harder to control when one is traveling through space.

While the situation of floating around in one's waste doesn't sound good to either gender, the event would be significantly more problematic for women, Johnson noted. Given that Sally Ride didn't launch until June 1983, NASA never needed to address the issue of women's bodily functions and suits -- until now.

Johnson said that in microgravity, liquids like tears will 'stick' to surfaces (i.e. tears stuck on eyelashes).

"For females, it gets a little harder, obviously, because of the geometry of a person's body, and then you have to deal with issues like pubic hair," Johnson said. When a woman is on her period, not having proper waste disposal for her bodily fluids can lead to crippling infections.

"You want a design that any normal, functioning woman should be able to use without putting additional requirements on them," Johnson said. "So you have to design something that can basically encompass most of their pubic hair, while also protecting them from infections like [urinary tract infections] without fecal matter getting in the way. Stuff like that." 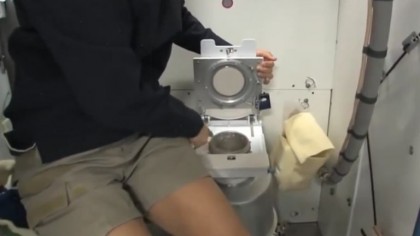 NASA Asks World 'What Should We Do With Astronaut Poop?'

Overall, a similar system for men was last used by NASA all the way back in the early Apollo mission era. That style of waste disposal ended in the mid-1970s. However, NASA has since made significant upgrades to the one-stop-style suits.

The solution developed by Johnson might stretch beyond just space and into other extreme industries. In an interview, she mentioned that long-term campers, backpackers, and adventurous outdoors people could benefit from this technology -- especially women who participate.

"You start looking at the camping industry, and you start seeing a lot of these portable urination devices that you can carry around with you so you don't have to squat in the middle of the forest," Johnson said. "[There are] these paper bags that you can take to a concert and women pull out of their purse so they don't have to sit on a disgusting toilet. It was almost a revelation for me as a female to see all these products — like, who knew these existed? And it's kind of taboo to talk about but it's interesting, because it feeds into stuff like this that we're trying to do with spacesuits."