NASA Discovers a Pulsar Shot Out of a Supernova at 2.5 Million MPH

NASA astronomers discovered an extraordinary pulsar rocketing through the galaxy at 2.5 million miles an hour after it was shot out of a supernova like a cannonball.

Astronomers have identified a “cannonball” pulsar that is shooting through space at nearly 2.5 million mph.

Cannonball Pulsar Shot Out From a Supernova

Astronomers working with NASA’s Fermi Gamma-ray Space Telescope (FGST) and the National Science Foundation's Karl G. Jansky Very Large Array (VLA) have identified a remarkable pulsar, named PSR J0002+6216 (J0002), that was shot out from the remnant of a supernova, identified as CTB 1, at nearly 2.5 million miles an hour—it even has a radio-emitting tail that points back to the supernova that created it, drawing its path in space like a contrail.

At that rate, it could travel the distance between the Earth and the Moon in about 6 minutes.

“Thanks to its narrow dart-like tail and a fortuitous viewing angle, we can trace this pulsar straight back to its birthplace,” said Frank Schinzel, of the National Radio Astronomy Observatory (NRAO) in Socorro, New Mexico. “Further study of this object will help us better understand how these explosions are able to ‘kick’ neutron stars to such high speed.”

Schinzel, together with Matthew Kerr of the U.S. Naval Research Laboratory in Washington, and Dale Frail, Urvashi Rau, and Sanjay Bhatnagar of NRAO presented their findings at the High Energy Astrophysics Division meeting of the American Astronomical Society in Monterey, California and have submitted their paper to the journal Astrophysical Journal Letters for future publication.

Pulsars, extremely dense, rapidly spinning neutron stars, are what is left behind by a star that has gone supernova. 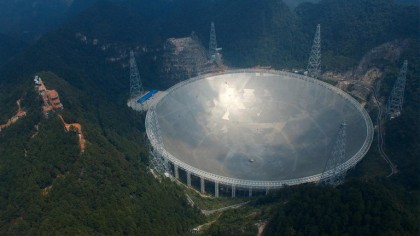 On their own, they are some of the most fascinating objects in the universe, even when they aren’t shot out of the explosion of a star like a cannonball, but this pulsar is rather unique.

Located in the constellation Cassiopeia, J0002 spins at a steady rate of 8.7 times a second, producing a directed gamma ray pulse with every rotation.

The pulsar was observed about 53 light-years away from the center of CTB 1 and its rapid movement through the remnant gases and material of CTB 1 produced shock waves that created the pulsar’s tail of magnetic energy and particles, detectable by the VLA. At 13 light-years in length, astronomers can draw a clear line from the pulsar back to the center of CTB 1, leaving no doubt as to its origins.