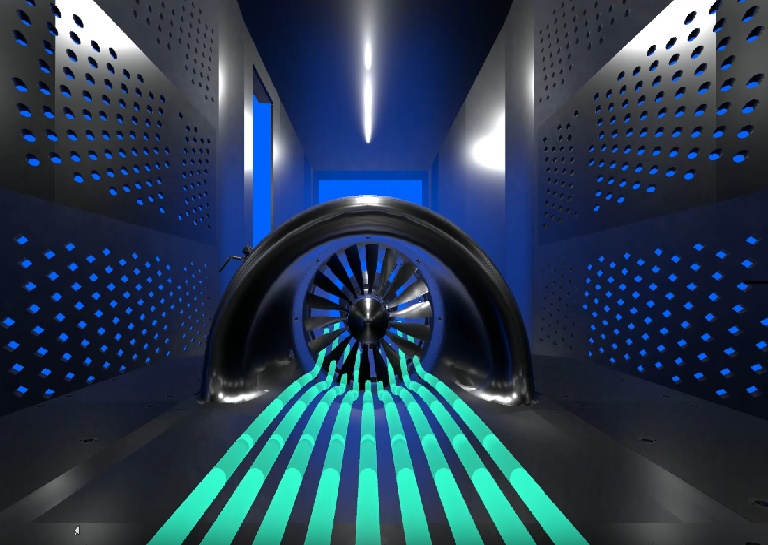 NASA recently ran its first-ever tests of a new jet engine technology which will increase fuel efficiency higher than ever.

NASA is continuously revolutionizing and improving the ergonomics. Previous advances in NASA flight technology improved fuel efficiency by 50 percent. Pratt and Whitney have also made significant improvements in turbines by developing geared turbofan engines which are 15 percent more efficient than other engines. Now, NASA is back in the headlines yet again with another jet engine improvement.

Modern jet engines are typically housed away from the aircraft's body to avoid intaking the boundary layer* around the wing. The boundary layer impacts how air flows around the wing, also partially contributing to the amount of lift produced. The boundary layer of an aircraft is either turbulent or laminar. The surface area on the top of a wing is larger than the underside to force the air to travel a longer distance. Part of the air which contacts the wing slows down almost entirely. As a result, the pressure is lowered, and the speed increases. The pressure on the underside is then higher than the top of the wing, causing the lift to increase.

*The boundary layer is the thin layer of air which travels over the surface of an aircraft wing or airfoil. See below

Previously, engines were typically placed out of the range of the slower moving boundary layer. Though, NASA engineers believe is is possible to significantly reduce fuel burn by integrating an aircraft's engines into the boundary layer. A new propulsor design which features an engine that ingests the boundary air recently underwent testing at NASA’s Glenn Research Center in Cleveland.

The modification could improve fuel efficiency by four to eight percent more than the advanced engine designs currently in use today.

The difficulties of changing engine position

Changing the position of the engine drastically changes the properties of the flow of the intake air. Regions of boundary air closest to the wing are extremely turbulent causing a lot of distortion. The distortion drastically affects the operation performance of the fan and increases the amount of stress experienced by the fan. To overcome the challenge, NASA engineers designed a much stronger fan to withstand the distortion.

Currently, NASA Glenn is testing a newly refined propulsor in its 2.5-meter by 2-meter wind tunnel.  The new propulsor was designed by United Technologies Research Center and is currently being researched by Virginia Polytechnic and State University. The prototype makes use of boundary layer ingesting (BLI) and is first design of its kind ever to be tested.

After years of preparation, the model has finally been constructed and investigated by various contributing institutions.

“Studies backed by more detailed analyses have shown that boundary layer ingesting propulsors have the potential to significantly improve aircraft fuel efficiency,” says David Arend, a BLI propulsion expert at NASA Glenn.“If this new design and its enabling technologies can be made to work, the BLI propulsor will produce the required thrust with less propulsive power input. Additional aircraft drag and weight reduction benefits have also been identified.”

The future of BLI

Though NASA has not yet released a full report of its findings, the research is promising. The largest inhibiting factor of the design is engineering blades which can withstand turbulent flow. Engineers must design stronger propellors or improve a new inlet design to reduce distortion. On paper, the mathematics prove to be promising. Though without a new fan design, the idea will not take off.

If NASA overcomes the challenges it faces with the BLI propulsor, engineers will be able to continue the trend of designing and manufacturing cutting-edge, environmentally responsible aircraft. More updates coming soon.