The mission will see this laser-toting ice-measuring instrument explore our planet's icy surfaces in unparalleled detail.

NASA launched its Ice, Cloud and land Elevation Satellite-2 (ICESat-2) mission at 9:02 a.m. EDT (5:46 a.m. PDT). The laser-toting ice-measuring satellite is now on its way to space where it will soon track the changing heights of Earth's ice structures.

With the #ICESat2 mission launched, it is heading to orbit. Once there, it'll time how long it takes for laser beams to travel from the satellite to Earth & back. Scientists can calculate the height of glaciers, sea ice, forests, lakes + more w/ this data https://t.co/vPDRGmrwyZpic.twitter.com/2wdSqHcq7P

The liftoff of @NASA_ICE's #ICESat2 is now set for 9:02am ET. The shift gives the launch team additional time to resolve a temperature issue on the second stage of the rocket. Watch: https://t.co/MIVnfneKo2pic.twitter.com/R4iNlJCV7j

Forecasters predict a 100% chance of favorable weather for tomorrow’s launch of our #ICESat2 satellite that will measure the changing height of Earth's ice. Starting at 9pm ET, watch the tower rollback in preparation for this @NASA_Ice mission. Info: https://t.co/72CDs3AHrHpic.twitter.com/mX7aXKsBcc

Earth’s cryosphere will now be explored as never before through ICESat-2's combination of lasers with a very precise detection instrument. "By timing how long it takes laser beams to travel from the satellite to Earth and back, scientists can calculate the height of glaciers, sea ice, forests, lakes and more – including the changing ice sheets of Greenland and Antarctica," explained NASA's blog. 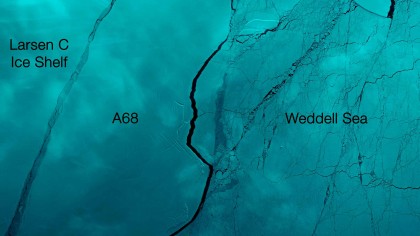 Unlike its predecessor, the original ICESat, ICESat-2 is essentially employing what NASA describes as "a micro-pulse, multi-beam approach." Using a sensor equipped with a high pulse-repetition rate of about 10 kHz, the satellite will provide measurements every 70 cm along its tracking journey.

This will result in improved elevation estimates of sloped areas and rough land surfaces. Most of all, the project will provide details on height differences between polar oceans and sea ice contributing to analyzing the current impact of global warming escalation.