The InSight probe will join five other spacecraft currently monitoring the Red Planet. This new equipment could give scientists the most in-depth data yet.

NASA just launched their latest crafts to better understand Mars. The Atlas V 401 rocket is on its way to becoming the first interplanetary mission on its way to the Red Planet.

The lift off took place from Vandenberg Air Force Base in California at 7:05 EDT.

LIFTOFF! Humanity’s next mission to Mars has left the pad! @NASAInSight heads into space for a ~6 month journey to Mars where it will take the planet’s vital signs and help us understand how rocky planets formed. Watch: https://t.co/SA1B0Dglms pic.twitter.com/wBqFc47L5p

With the Atlas V was the InSight lander -- a unique landing craft set to touch down on the Martian surface in late November. InSight stands for Interior Exploration using Seismic Investigations, Geodesy and Heat Transport. The InSight craft will join the five other crafts currently patrolling the Martian surface or atmosphere.

"This is a big day. We're going back to Mars," NASA's new administrator Jim Bridenstine, who took charge of the agency last month, said in a congratulatory call to the InSight team after launch. "This is an extraordinary mission with a whole host of firsts."

InSight was also accompanied by two briefcase-sized satellites. Those devices are intended to be the first ever Martian cubesats. The CubeSat program started nearly 30 years ago with the goal of making compact satellites that can go deeper into space than any other satellites before.

The InSight probe also carries another piece of earth with it: a chip including 2.4 million names from fans of space exploration. That chip even includes Star Trek actor William Shatner, who originated the roll of Captain Kirk in the franchise.

InSight "will probe the interior of another terrestrial planet, giving us an idea of the size of the core, the mantle, the crust — and our ability then to compare that with the Earth," NASA Chief Scientist Jim Green said during a prelaunch news conference on Thursday (May 3). "This is of fundamental importance for us to understand the origin of our solar system and how it became the way it is today."

According to NASA, the InSight probe can best be compared to a dentist finally performing an overdue checkup on a patient. InSight will use its heat problem to collect dirt samples. It will also check the planet's pulse stemming from "marsquakes" using an ultraprecise seismometer. The Seismic Experiment for Interior Structure (or SEIS) can spot vibrations the size of a hydrogen atom, according to its developers.

InSight represents the first time explorations have ever been so intrusive into Mars. Such investment into today's launch as well as to InSight and its equipment has brought up reasons why researchers around the globe are so interested in getting to Mars. 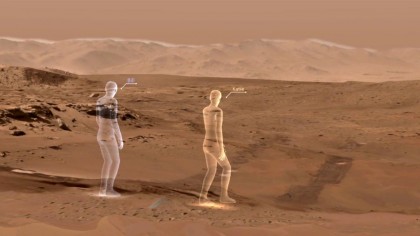 InSight's principal investigator Bruce Banerdt of the Jet Propulsion Laboratory called Mars the "Goldilocks planet" in a press conference last week. Banerdt noted that it could give humanity not only a better understanding of how to potentially get humans on Mars, but also further insights into how the Earth came to be.

"It's actually undergone the processes of planetary differentiation that the Earth did," he added. "But about maybe 20 [million] to 50 million years after it was formed, it just kind of stopped. We have lots of geology going on on the surface, but all those fingerprints of those early processes are still retained in the deep interior. And so, that's why we want to go measure the fundamental parameters of the deep interior."

InSight's monitoring systems will require all hands on deck, particularly with its SEIS technology. No other Mars rover or Mars system has ever extended scientific gear this far away from the craft.

InSight also borrowed parts from previous electronics such as Mars Atmosphere and Volatile Evolution (MAVEN), an orbiter first put into service in 2014. However, even with considerable pieces of 'heritage hardware' to better InSight's chances, the team admitted to press that it was still an incredibly hard build being sent off to an even harder location.