The Parker Space Probe now has a heat shield capable of maintaining 85 degrees Fahrenheit despite the Sun's blazing temperatures.

NASA is preparing its first probe ever to "touch the sun." The space agency recently installed its cutting-edge heat shield in preparation for one of NASA's most interesting solar studies to date. That heat shield should, in theory, prevent the space craft from being burned by the sun.

The mission, set to launch August 4, will take a probe roughly 4 million miles from the sun. That would be the closest a man-made space craft has ever gotten to the sun. For a sense of comparison, Mercury -- the closest planet to the sun -- gets as close as 29 million miles.

The key to the probe's potential success is the heat shield just 8 feet in diameter. The Parker Solar Probe's closest distance to the sun will expose the probe to temperatures that could reach nearly 2,500 degrees Fahrenheit (approximately 1,370 degrees Celsius). However, the shield is expected to keep the instruments at a comfortable 85 degrees Fahrenheit.

How does the NASA team expect the heat shield to survive the sun's extreme temperatures? The shield is made of two panels that have superheated carbon-carbon composite sandwiched between a lightweight 4.5 inch carbon foam coar. The side of the shield facing the sun will also be treated with a unique white coating specially formulated to reflect the Sun's heat and energy away from the space craft as it can.

The heat shield only weighs roughly 160 pounds, and the foam core of the shield is 97 percent air. The NASA team said it had to be this light in order to keep up with the travel speeds expected out of the probe. Currently, the team estimates the Parker Solar Probe will travel some 430,000 miles per hour during its closest trip to the sun. That's means it could travel from Philadelphia, Pennsylvania to Washington D.C. in about a second.

The Parker Solar Probe is part of NASA's larger Living with a Star Program (LWS) meant to explore how planetary bodies interact with their stars. More specifically, the probe and program want to discover more about how the Sun and Earth interact with each other, and ultimately how those interactions affect our daily lives and society. 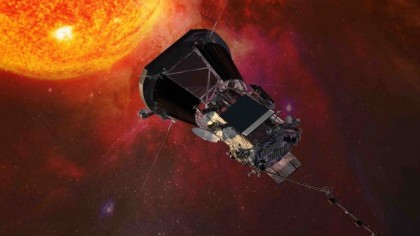 This Thermal Protection System was first installed to the spacecraft very briefly in fall 2017. This new installation is the first time in months that the Parker Solar Probe has been completely integrated as one craft, NASA noted in a statement.