On May 12, 2016 NASA's Hubble Space Telescope captured this new and amazing photograph of Mars when the planet was just 50 million miles from Earth. On May 30, Mars will be the closest it has been to Earth in 11 years, at a distance of 46.8 million miles.

There's a considerable amount of buzz floating around planet Mars because of SpaceX's announcement that it will send a mission to Mars by 2018. Expect the buzz to reach a fever pitch by that year. 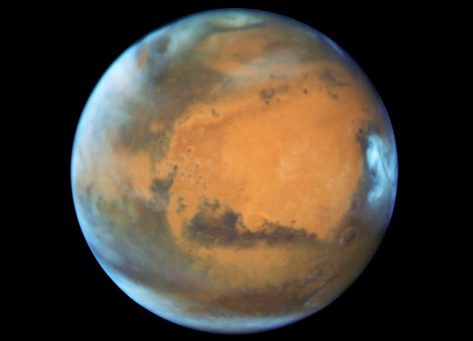 The Hubble Telescope is well known for capturing distant galaxies and other faraway phenomenon, but it also can capture closer objects like the planets in our solar system. These new photos were taken when Earth and Mars approached opposition and were on the same side of the sun. They were very close to each other when the photos were taken. Mars is especially photogenic when it reaches opposition with Earth because the sun fully illuminates its surface, creating the perfect photo opportunity.

Here's a video that clarifies this point:

The Hubble photos reveal details that are as small as 20 to 30 miles across. This new photo reveals polar ice caps, clouds, and geological features such as smallish mountains, erosion channels and immense canyons and volcanoes. One of the most impressive aspects of these new photos are the clouds. You can see them both at the poles and also in the middle area of the planet. I think many of the previous photos of Mars didn't show the clouds as well as these do.

The large orange area in the middle of the image is Arabia Terra which covers about 2,800 miles. The landscape is full of craters and is heavily eroded, which could indicate that it might be one of the oldest terrains on Mars.

The large dark spot on the far right is Syrtis Major Planitia, one of the first features identified on the surface of the planet by observers in the 17th century. It was this dark spot that was first used to measure the rotation of Mars many centuries ago. Researchers now know that this dark area is an ancient, inactive volcano.

By the way, did you know that a Martian day is about 24 hours and 37 minutes? Also, while Earth takes 365 days to travel once around the sun, Mars takes 687 Earth days to make the trip. As a result, Earth makes nearly two full orbits in the time it takes Mars to make just one. This results in the occurrence of Mars and Earth oppositions about every 26 months. 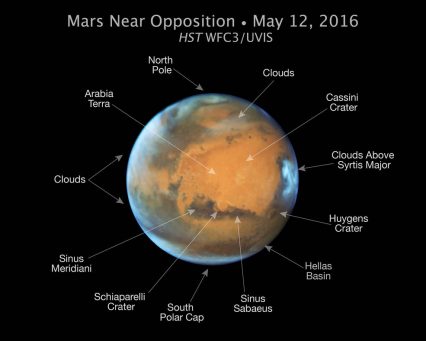