Colder-than-average temperatures in the Antarctic stratosphere were ideal conditions for the destruction of our ozone this year but declining levels of ozone-depleting chemicals saved the day!

According to a fresh report by NOAA and NASA scientists, the Ozone hole that develops every September over the Antarctic region was above the average size this year but was smaller compared to what would have been in the year 2000. This healing is essentially due to the declining levels of ozone-depleting chemicals.

Better than 20 years ago

Antarctica is the coldest regions in the world, generating perfect conditions for the destruction of Ozone during the month of September, but due to the declining levels of depleting chemicals prevented the hole from being as huge as it would have been 20 years ago.


"This year's colder temperatures would have given us a much larger ozone hole if chlorine was still at levels we saw back in the year 2000," said Paul A. Newman, chief scientist for Earth Sciences at NASA's Goddard Space Flight Center in Greenbelt, Maryland.

The research scientists of National Oceanic and Atmospheric Administration said that this year's weather was cold enough for almost full depletion of the Ozone layer in a deep 5 km layer over the South Pole region. Active degradation of Ozone occurs on the polar stratosphere clouds in this 3.1-mile deep atmospheric layer.

According to the findings by NOAA, in October, the amount of Ozone reached a minimum of 104 Dobson units (Dobson units is the standard unit used to express the concentration of ozone). Bryan Jhonson, the scientist at NOAA, said that 104 Dobson units of the Ozone layer are amongst the twelfth lowest records out of thirty-three years of the institute's ozonesonde measurements at the Antarctic region.

"Even with this year's optimum conditions, ozone loss was less severe in the upper altitude layers, which is what we would expect given the declining chlorine concentrations we’re seeing in the stratosphere," Johnson said.

The Ozone or the O3 molecules get depleted due to their reaction with Chlorofluorocarbons (CFC) molecules. When the CFC molecules attain a certain height in the upper atmosphere, they are degraded by the high-frequency Ultraviolet radiations.

The UV Ray splits the CFC's leaving a Chlorine atom which acts as a major catalyst in the destruction of the Ozone layer. On reaction with the free molecule of the Chlorine atom, the ozone molecules disappear and form free oxygen molecules. 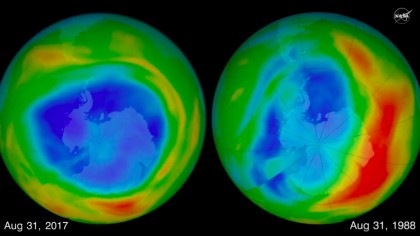 On an average, a single chlorine atom can destruct almost 100000 Ozone molecules and can stay active for around 100 years.

At first the CFC's were thought to be completely safe, inert and environment-friendly, but later on, it was found out in the research that this compound is the crucial agent in the Ozone hole.

The levels of chlorine in the stratosphere reached to its peak levels in the 2000's and after that with the decline in the use of items producing CFC's lead to the slight decline in the Ozone hole. Despite the reduction in ozone-depleting chemicals, the levels are still high enough to damage the Ozone layer.