The agency's target test flight schedule for Boeing's CST-100 Starliner and SpaceX's Crew Dragon includes a first round of uncrewed missions in late 2018.

Last week, NASA not only announced the nine astronauts assigned to its new crewed mission, the agency also revealed its schedule for test flights. It turns out NASA's much-awaited Commercial Crew Program will see its first Boeing crewed flight mid-2019 and its SpaceX one as early as April 2019.

Hardware to be ready!

The latter was confirmed by SpaceX founder and CEO Elon Musk himself who responded to an article regarding the tentative flight schedules on Twitter. The space enthusiast said that, should the two Crew Dragon test flights perform well, the hardware will be ready.

The firm has come a long way from first announcing its Crew Dragon ship a mere month ago. And NASA could not be more excited.

"The next generation of American spacecraft and rockets that will launch astronauts to the International Space Station are nearing the final stages of development and evaluation. NASA’s Commercial Crew Program will return human spaceflight launches to U.S. soil, providing safe, reliable and cost-effective access to low-Earth orbit on systems that meet our safety and mission requirements," read the agency's statement.

Our @Commercial_Crew Program will soon return America’s capability to launch humans from our nation’s soil to the @Space_Station. For the 1st time since 2011, astronauts will again leave Earth from the U.S. Watch to learn more about our announcement: https://t.co/wI51HD5BFM pic.twitter.com/J3stoHe9Q3

However, there is still much work to be done before the nine and men women chosen to head to the International Space Station can safely embark on NASA’s new ships. Both Boeing's CST-100 Starliner and SpaceX's Crew Dragon will need to meet stringent safety requirements and prove they are fit for regular flights. 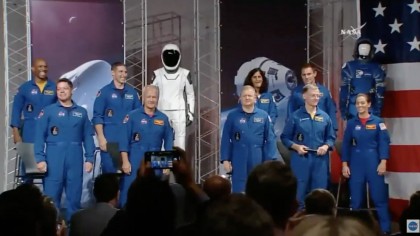 Recently, issues relating to NASA's certification process for crewed missions came under review by the US Government Accountability Office. The department released an alarming report that indicated the agency could see its Commercial Crew Program delayed resulting in a loss of access to the International Space Station (ISS) for nine months or possibly more.

Currently, NASA can only send staff to the orbiting laboratory with Russia’s Soyuz spacecraft. Unfortunately, NASA’s contract granting access to the Russian ship runs out in November of 2019.

However, if all goes well with the agency's current target test flight dates, the problem is certain to be avoided. We wish NASA luck and hope for the best. After all, the pursuit of knowledge should never be delayed!

Congratulations to the newly announced @Commercial_Crew members. These missions will continue the outstanding #research happening aboard your orbiting laboratory. Get ready for more #science at 17,500 miles per hour! https://t.co/TfozJiau9O pic.twitter.com/8ZqrRcBdsv