The new study opens the opportunity to study the effects of magnetic fields in black hole feeding.

Ever seen pictures of a Black Hole? If you think you have, then we are sorry to say that it’s not the real deal. The pictures of the Black Hole we see on the internet or in movies are illustrations that are created in the minds of artists, who gives a rough figure on how a black hole would look like.

We still haven’t developed the tech to view it in its complete glory.

However, we haven’t seen it, so how do we know it exists? We do it by tracking down certain disruptions and characteristics that only a Black Hole possess.

The most important and relevant telltale signs are astrophysical jets and orbits of stars and particles that circle around a black spot having an immense mass at its center.

A new method to identify black holes in the Universe

However, researchers at NASA have observed something distinctive for the Black Hole that may make it, even more, easier to spot Black Holes in the universe – Magnetic fields.

Black Holes can be active or dormant. Active Black Holes are also called feeding Black Holes due to the fact that they suck up any object or space debris that comes close to its gravitational pull.

Active Black Holes have a cloud of dust surrounding them called Torus. Researchers are still not sure how the Torus is formed, but the newly found magnetic fields might be the answer to that very question.

“It’s always exciting to discover something completely new,” said Enrique Lopez-Rodriguez, a scientist at the SOFIA Science Center, and the lead author on the report of this new discovery. “These observations from HAWC+ are unique. They show us how infrared polarization can contribute to the study of galaxies.”

With the data compiled from the Hubble Space Telescope, Herschel Space Observatory, and the Gran TelescopioCanarias researched now believe that the Torus is maintained by the strong magnetic fields surrounding the Black Hole.

More research is needed to confirm the specifics, but it takes us one step closer to cracking the confusion surrounding Black Holes and difficulties associated with identifying them.

Black Holes still remain as a subject of much confusion even among distinguished scientists and researchers. Every time we get close to unravel its mystery, it presents us with more confusing questions.

Something of this sort happened recently that outright shocked the science community – something emerged from the Black Hole.

Now, why is this so intriguing? The answer is that Black Holes are known to have very strong gravitational pull, so much so that it doesn’t even let light escape it.

But new readings from the Swift, NASA’s Explorer, and the Nuclear Spectroscopic Telescope Array (NuSTAR) recorded a light eruption from the center of a supermassive Black Hole in the Pegasus constellation (324 million light years away). 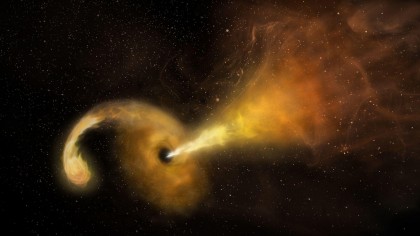 Researchers believe it to be Corona, which is a high-energy beam of X-ray that shoots from a Black Hole after gaining enough energy from extremely high-energy particles.

“The corona gathered inward at first and then launched upwards like a jet. We still don’t know how jets in black holes form, but it’s an exciting possibility that this black hole’s corona was beginning to form the base of a jet before it collapsed,” said Dan Wilkins of Saint Mary's University in Halifax, Canada.

Black Holes are certainly interesting, and it is sure that they will keep on doing it. We have come a long way and have a long way to go, but indeed, we are getting closer to the crux!

The findings of this research are published in The Astrophysical Journal Letters.