NASA recently awarded Lockheed Martin with an extensive contract to develop new supersonic planes. The only catch is that the plane must avoid making the sonic booms associated with breaking the sound barrier.

Craft like the Concorde made headlines over a decade ago, but nothing has yet to really take its place in more updated supersonic jets. For the first time, NASA's aeronautics is building a piloted X-plane designed from scratch in conjunction with Lockheed Martin.

“It is super exciting to be back designing and flying X-planes at this scale,” said Jaiwon Shin, NASA’s associate administrator for aeronautics. “Our long tradition of solving the technical barriers of supersonic flight to benefit everyone continues.”

The $247.5 million contract even put a due date on the X-plane being delivered to the Armstrong Flight Research Center in California. Everything should be done by 2021.

"We look forward to applying the extensive work completed under QueSST to the design, build and flight test of the X-plane, providing NASA with a demonstrator to make supersonic commercial travel possible for passengers around the globe," program manager Peter Iosifidis said in a statement.

“We’ve reached this important milestone only because of the work NASA has led with its many partners from other government agencies, the aerospace industry and forward-thinking academic institutions everywhere,” said Peter Coen, NASA’s Commercial Supersonic Technology project manager.

The plane already has a generalized configuration and primary design. It'll be developed from a preliminary design that Lockheed Martin developed under a separate contract in 2016. Current spec estimates for the final craft note that the aircraft will be 94 feet (28.6 m) long, have a wingspan of 29.5 feet (8.9 m), and will weigh 32,300 lbs (16.15 t) when completely fueled.

"When the rule is changed, the door will open to an aviation industry ready to enter [a] new supersonic market in our country and around the world," Shin said in an interview with Space.com. "This X-plane is a critical step closer to that exciting future."

The prospect of flying the latest in supersonic tech has already excited NASA's pilots. Jim Less is set to be the pilot behind the controls when Lockheed Martin's pilots have cleared the design for flight. 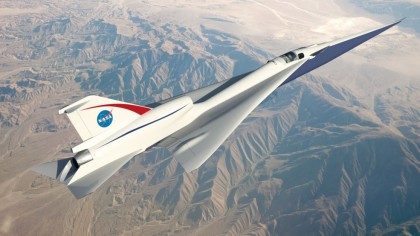 “A supersonic manned X-plane!” Less said, already eager to get his hands on the controls. “This is probably going to be a once-in-a-lifetime opportunity for me. We’re all pretty excited.”

“It’s pretty rare in a test pilot’s career that he can be involved in everything from the design phase to the flight phase, and really the whole life of the program,” Less said.

Tentatively, Phase Three testing will take place between 2022 to 2025 with community response activity taking place in up to six cities around the United States.

Watch the Lockheed Martin F-22 Raptor in All Its Glory