NASA Shows How Water Could be Made on The Moon

New research has found that solar wind on the Moon creates a "chemical factory" that produces OH molecules.

Water is one of life's most essential element. As such, when it comes to possibly colonize the Moon the question of whether or not it has water has been hotly debated.

SEE ALSO: DOES WATER REALLY EXIST ON THE MOON?

Creating water on the moon

Now, a team of NASA scientists has found that water may actually be formed on the moon. The researchers have discovered that solar wind could be the key to producing the particles needed for water.

The Solar wind is a stream of charged particles released from the upper atmosphere of the Sun. On Earth, our magnetic fields protect us from this release.

However, on the Moon, the constant stream of plasma and particles flows smoothly at 450 kilometers per second (or nearly 1 million miles per hour). When this happens, strange but potentially useful chemistry unfolds.

Using a computer program, NASA scientists studied this chemistry and found it is responsible for making hydrogen (H) atoms. These atoms then latch onto the many oxygen (O) atoms from the oxygen-bearing molecules that make up lunar soil.

Once this happens, hydrogen and oxygen make the molecule hydroxyl (OH). And since water is simply H2O, OH is one of its components.

"We think of water as this special, magical compound," said William M. Farrell, a plasma physicist at NASA's Goddard Space Flight Center in Greenbelt, Maryland, who helped develop the simulation. "But here's what's amazing: every rock has the potential to make water, especially after being irradiated by the solar wind."

Understanding how much water or potential sources of water are on the Moon is key to sending humans there permanently. More important is finding out where those resources can be harvested.

Data from several spacecraft using infrared instruments to identify and understand the chemistry of the Moon's surface have been useful. However, the question of how these atoms and compounds form remains. 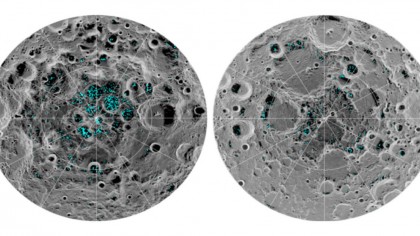 Some speculate that meteor impacts initiate these chemical reactions while others believe solar winds do. "From previous research, we know how much hydrogen is coming in from the solar wind, we also know how much is in the Moon's thin atmosphere, and we have measurements of hydroxyl in the surface," said Orenthal James Tucker, a physicist at Goddard who spearheaded the simulation research.

"What we've done now is figure out how these three inventories of hydrogen are physically intertwined."

Tucker's simulation has found that as the solar wind blasts the Moon it breaks the bonds among the atoms that make up the celestial object. Silicon, iron, and oxygen are set free, leaving free-floating oxygen atoms with unsatisfied bonds.

Naturally, these freed oxygen atoms grab on to the hydrogen atoms from the solar wind creating what Farrell describes as a "chemical factory for water." Better yet, the researchers' new findings stipulate that every exposed body of silica in space has the potential to create these compounds giving near unlimited chemical water factories.