NASA Successfully Inflated Their Space Habitat on the ISS

If you haven't heard, NASA in conjunction with Bigelow Aerospace developed an inflatable habitat that was implemented aboard the International Space Station. After one failed attempt, the crew aboard the ISS was able to successfully inflate the habitat after several hours of work. According to Engadget, the pod is now 5.6 feet out and 10.6 feet across. There's still a little bit of work to be done on the inflation of the habitat, as the final size will span 7 feet out from the connecting point onboard. Check out the short timelapse video of the spherical habitat inflating below.

NASA encountered hiccups in the first attempt to inflate the pod as the fabric maintained some rigidity from being packed down for so long. Now that the pod is almost fully inflated, the crews' goal is to pressurize the pod so that it can become inhabitable, according to Futurism. The tweet from the ISS below shows a short video on the successful inflation of the BEAM inflatable habitat.

This is the first test of an inflatable habitat in space, and it could mean big things for the amount of room people have while onboard. Square footage is a precious resource for those aboard the ISS, and this inflatable pod could help increase that. 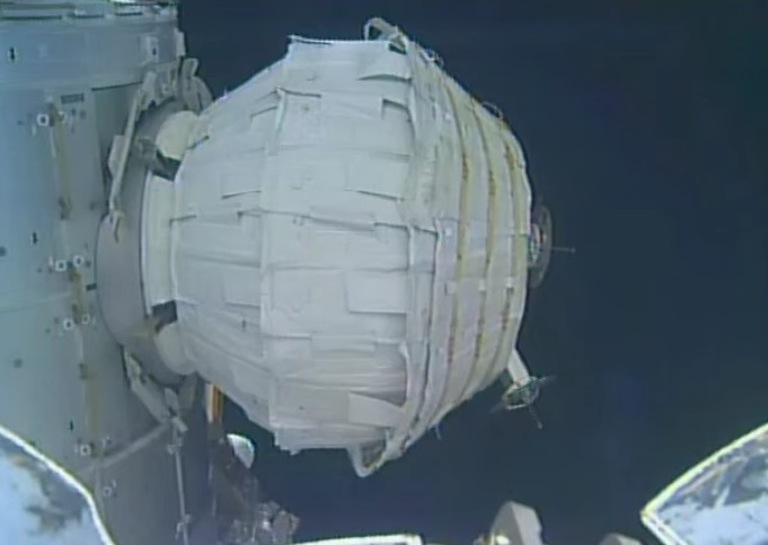 It will still be about a week until crews are able to step foot inside the habitat, but so far everyone is hopeful and looking towards the success of the module. Research completed on the pod's structure as well as collapsible dwellings could help shape the travels and lives of future explorers on Mars.