The latest and probably last study on this alien traveler is from the Spritzer telescope that tracks celestial objects using the infrared energy they radiate.

Interstellar object 'Oumuamua, first spotted back in October, has caused quite a stir since it flew into our lives. Speculations surrounding this visitor from far far far away lands have even seen legends like Stephen Hawking debate whether it may be an alien spaceship. 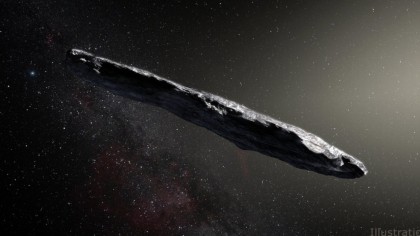 Now, NASA has announced the latest study on our famous extraterrestrial traveler from an analysis done with NASA's Spitzer Space Telescope. "'Oumuamua has been full of surprises from day one, so we were eager to see what Spitzer might show," said David Trilling, lead author on the new study and a professor of astronomy at Northern Arizona University.

The infrared Spitzer was pointed at 'Oumuamua in the weeks after its discovery but the object was too faint for the telescope to detect when it looked more than two months after the object's closest approach to Earth in early September. "The fact that 'Oumuamua was too small for Spitzer to detect is actually a very valuable result," added Trilling.

A key view of infrared energy

Spitzer's view of 'Oumuamua was key because the highly specialized tool tracks asteroids and comets using the infrared energy they radiate. This allows for more specific information regarding an object's size.

Researchers, therefore, used the fact that 'Oumuamua was too faint for Spitzer to detect to set a limit on its total surface area and applied three separate models to deduce its potential true size and shape. They extrapolated that 'Oumuamua's "spherical diameter" is limited to 1,440 feet (440 meters), 460 feet (140 meters) or perhaps as little as 320 feet (100 meters).

The new study also found evidence that 'Oumuamua may be up to 10 times more reflective than our solar system's comets. They stipulated that despite the traveler storming through interstellar space for millions of years, far from any star that could refresh its surface, its encounter with our Sun, a little more than five weeks before it was discovered, may have led to its reflectiveness.

The study may sadly be the last we ever hear from 'Oumuamua as the traveling mysterious entity that has mesmerized so many is now well on its way beyond the reach of any existing telescopes.

"Usually, if we get a measurement from a comet that's kind of weird, we go back and measure it again until we understand what we're seeing," said Davide Farnocchia, of the Center for Near Earth Object Studies (CNEOS) at JPL and a coauthor on both papers. "But this one is gone forever; we probably know as much about it as we're ever going to know."

For now, we will have to make do with the memories of what we learned so far. The results of this latest and probably last study are published in the Astronomical Journal and co-authored by scientists at NASA's Jet Propulsion Laboratory in Pasadena, California.