In its final moments before leaving the Vera Rubin Ridge for its next destination, NASA’s Curiosity rover snaps a selfie like a boss.

After a year working on the Vera Rubin Ridge of Mount Sharp on Mars, NASA’s Curiosity rover is moving on to its next assignment—but not before snapping what is becoming a hallmark of the NASA Rover’s mission: the Curiosity selfie.

The latest picture shows NASA’s Curiosity rover on the Vera Rubin Ridge of Mount Sharp, where it has been for more than a year. It was taken right before the rover descended towards its new assignment in a clay rich region on the lower level of the south side of the mountain.

There, NASA scientists hope to study what they believe are ancient lake beds that existed back when Mars had water on its surface.

Curiosity has spent its time on the Vera Rubin Ridge drilling into the Martian soil for samples to analyze, finishing its 19th sample collection on December 15th, 2018. Curiosity’s selfie was snapped at this site, known as Rock Hall, and NASA scientists are still processing the data the rover has collected there and elsewhere on the ridge. 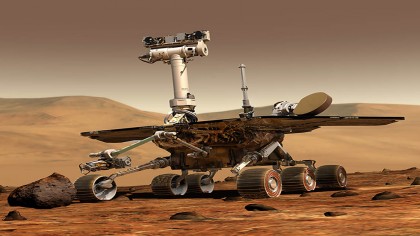 The picture shows signs of the abuse that the rover has experienced since landing on Mars in 2012. In the photo, the damage to one of its wheels is visible, which NASA scientists are saying they are watching closely, and red Martian dust clings to its frame, giving it a decidedly workman-like appearance.

In the background, a regional dust storm is visible, a reminder of the challenges Curiosity faces as it does its pioneering work on Mars and an uncomfortable reminder of the potential fate of its cousin rover, Opportunity, which has been out of contact with NASA engineers and is feared lost after a planet-wide dust-storm disabled it in June of last year.

Curiosity is on the hunt for what are known as “clay-bearing units” in the region, which NASA scientists hope will reveal the nature of the orbitally distinct areas, which may be ancient lake beds. On its way down from the ridge, it has been testing the chemical composition of the rock and soil to measure how it changes during its descent, while also taking photos of the surrounding area to help mission planners decide on Curiosity’s next course of action.

The data is being beamed up to the Mars orbiters where it is then transmitted back to Earth for further analysis and study, including further Curiosity selfies that it will undoubtedly take while it is down there.

Selfie Taking Is On the Rise in Europe