The record-breaking craft is also the fastest man-made object ever and has been built to withstand the sun's exorbitant heat and radiation.

In a second attempt today, NASA finally launched the first ever mission to the Sun at 3:31 am ET with its Parker Solar Probe spacecraft, the fastest man-made object ever. The historic mission will provide key research regarding long-standing important solar mysteries.

#SunDay is a good day for a launch to the Sun! ?☀️ In an hour, live coverage begins of our second attempt to launch our Parker #SolarProbe spacecraft that will help us answer important solar mysteries. Tune in starting at 3am ET: https://t.co/SAmsnwdwDO pic.twitter.com/jtceavPcSP

A delayed but at last successful launch

Timers have been reset. Officially proceeding with the countdown. L-14 minutes and counting. T-4 minutes and holding. #SolarProbe

As usual, the event was live-streamed on NASA Television and the agency’s website and was updated regularly on Twitter. The media reported on every aspect of this momentous mission from its name, the first ever after a live person solar physicist Dr. Eugene Parker, to the probe's impressive shield.

"His name belongs there," @Dr_ThomasZ says of the decision to name our Parker #SolarProbe spacecraft in honor of Dr. Eugene N. Parker who theorized the existence of the solar wind. Watch our countdown to the 3:31am ET liftoff: https://t.co/T3F4bqeATB pic.twitter.com/9CixXgZPoN

Parker Solar Probe now begins its journey to the Sun’s atmosphere, also called the corona, to study an area previously only glimpsed through eclipses. The spacecraft will go closer to the Sun than any other spaceship in history. 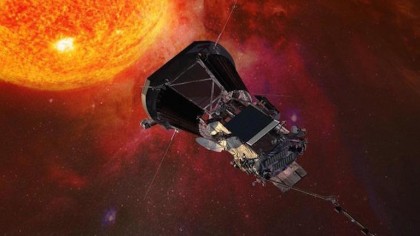 The sturdy craft starts its first trip aboard one of the world’s most powerful rockets, the Delta IV Heavy with an added third stage. Once in space, the craft only needs to drop 53,000 miles per hour of sideways motion to skim the sun's atmosphere.

However, this feat is actually a lot more complex than it seems. Over its seven-year mission, Parker Solar Probe will need to undertake seven Venus gravity assists to draw its orbit closer to the Sun for a final record approach of 3.83 million miles from the star's visible surface.

Once there, the craft will use its incredible cutting-edge heat shield to protect itself as well as its autonomous cooling system. Finally, breaking yet another record, Parker Solar Probe will reach 430,000 miles per hour on its final orbits, bolstered by the Sun's extreme gravity to become the fastest-ever human-made object.

However, in the end, Parker Solar Probe's most significant achievement will be its contribution to science. The research mission will return key information about the Sun including data on its corona, solar winds, and magnetic fields.

Our Parker #SolarProbe spacecraft launches at 3:53 a.m. EDT on Saturday, Aug. 11 for a mission to @NASASun that will help scientists learn more about solar wind - an exotic stew of magnetic forces, plasma and particles. Learn more from @NASAScienceCast: https://t.co/it9OxS89AQ pic.twitter.com/lA1bRADEjR

It will also observe the birth of the very solar wind that Dr. Parker predicted. "We’ve been examining the solar wind for over 50 years. But the wind is processed by the time it reaches Earth,"said Dr. Adam Szabo, the Parker mission scientist at NASA’s Goddard Space Flight Center.

"By studying it much closer to the Sun, the Parker Probe will be able to tell us such things as what part of the Sun is providing the energy source for the wind’s particles and how they can accelerate to such incredibly high speeds," he concluded.