The Hubble Space Telescope is in "safe mode" while NASA officials determine whether it will operate in a limited capacity.

One of NASA's most successful telescopes is in a precarious situation after a critical piece failed.

The Hubble Space Telescope is still in "safe mode" after one of its three gyroscopes (gyros) stopped functioning. Backup options have also failed.

Holding out for a gyro

Gyros are one of the most important parts of the telescope, helping to steady and direct the 28-year-old system. Safe mode allows NASA to put the telescope into some sort of stable configuration until ground control fixes the issue, NASA explained in a public statement.

The Hubble team is working to resume science after Hubble entered safe mode due to 1 of 3 gyros failing. Analysis and testing on the backup gyro are ongoing to determine why it is not performing as expected. For more info: https://t.co/T72X4pjLPI

The gyro failure wasn't exactly a surprise, according to the team. The Hubble Space Telescope was designed with several redundancies in the instance of inevitable part failure.

In 2009, Hubble got six fresh gyros during Servicing Mission-4. And even though Hubble needs three gyros at a time to operate at maximum efficiency, it can still observe its surroundings with just one working.

"The gyro that failed had been exhibiting end-of-life behavior for approximately a year, and its failure was not unexpected; two other gyros of the same type had already failed," NASA explained in a statement. "The remaining three gyros available for use are technically enhanced and therefore expected to have significantly longer operational lives."

After the failure, NASA powered up the enhanced gyro kept in reserve. They quickly discovered the backup wasn't fit for operating performance. With no other options, NASA sent the Hubble Space Telescope into safe mode.

The fate of Hubble's explorations relies on whether the space telescope will operate on one gyro or three. The Anomaly Review Board is investigating the issue further and should have a decision soon. They could choose to keep Hubble in "reduce-gyro" mode and only use one gyro. However, this would severely limit the sky covered by the telescope at any given time and restrict the data collected. 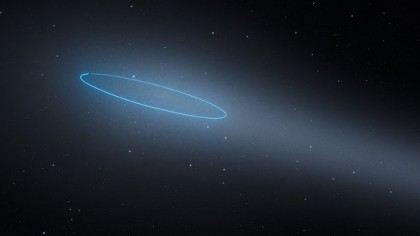 Launched in 1990, Hubble is no stranger to issues. The power system of the Space Telescope Imaging Spectrograph (STIS) failed in August 2004. That failure wasn't fixed until Servicing Mission-4 in 2009, the same mission that replaced the six gyros.

Despite a history of critical parts failing, the Hubble Space Telescope and its findings led to breakthroughs about black holes, supernovas, and even dark energy.

Interesting Engineering will continue to follow this story and update it as more information becomes available.