NASA's "Impossible" EmDrive Space Thruster Could Be Impossible After All

A propulsion system thought to be "impossible" by violating Newton's third law had seen some positive results in NASA testing. Now, a new study reveals those outcomes may have been due to experimental errors.

In November of 2016, NASA made headlines when its much-talked-about Electromagnetic Drive (EmDrive) paper was finally published claiming that the “impossible” propulsion system seemed to function. This controversial system, first proposed by British inventor Roger Shawyer in 1999, would use microwaves inside a cone-shaped metal cavity to generate thrust.

Shawyer claimed the EmDrive could be so powerful as to send humans to Mars in just 70 days. There was just one little problem: it defied our laws of physics, more specifically Newton's third law, making it "impossible".

This law states that every action must have an equal and opposite reaction which would mean that for the EM system to produce thrust, it would have to push something in the opposite direction. Yet at first it seemed to work, despite backlash stating any positive results were due to experimental error, until now.

A group from TU Dresden in Germany released a paper entitled, "The SpaceDrive Project - First Results on EMDrive and Mach-Effect Thrusters", presented at the Aeronautics and Astronautics Association of France’s Space Propulsion conference on May 16 that may soon put the EmDrive concept to rest once and for all. The team built an EmDrive similar to the one designed by NASA and placed it in a vacuum chamber to carry out tests.

They bombarded its cavity with microwaves and measured its movements using lasers. Although they found it produced thrust congruent with previous tests, when the position was changed so that the microwaves could not produce thrust in the direction of the spring, the drive, they found, pushed just as hard.

The team then further cut the power by half only to realise that it barely had an impact on the thrust. The logical conclusion was that something else was producing the thrust possibly an interaction between Earth’s magnetic field and the cables powering the microwave amplifier.

One theory is that the current running through unshielded cables that did not fit inside the box could interact with magnetic fields to push the EmDrive forward. The researchers calculated the strength of this effect to be 4 micro-Newtons. 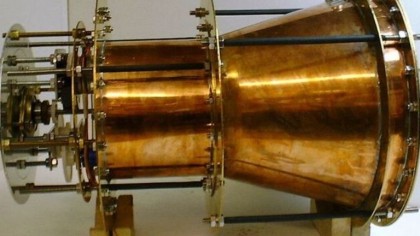 If magnetic fields instead of microwaves are driving the thrust, it will therefore be impossible to replicate in space far away from the influence of Earth’s magnetic field. However, since TU Dresden's experiments were run at a lower power than NASA's, more tests at higher powers and with other variations need to be done before any definite conclusions can be made.

California State University in Fullerton professor of Physics  Jim Woodward told New Scientist that even though it is not sure that there is no signal yet, "if it is present it’s very small". The physicist added that this "propellant-less propulsion business is regarded by those in the mainstream as speculative at best," yet seemed confident that this team would provide the final answers.

“If there is a real effect, they’ll find it,” he said. In the meantime, space travel will have to wait.

Could Simulation Theory Explain Why "Space is Hard"?