The X3 thruster is currently one of three prototypes being considered by the space agency for a planned trip to Mars in twenty years.

Propulsion is a considerable focus when it comes to the future of space exploration, not only will thrust get space explorers to far off planets like Mars, a huge amount will cart them there in less time. But to get enough thrust, you need an impressive thruster, and NASA plans on building one.

NASA’s Glenn Research Center which specializes in solar electric propulsion is developing such a thruster, namely the X3 Hall-effect thruster which is a project headed up by the space agency, the US Air Force and the University of Michigan. The thruster is a scaled-up model of the kinds used on the Dawn spacecraft. The research center is currently the only vacuum chamber in the U.S. that can handle the X3 thruster.

Dawn was launched a decade ago with the aim of delivering knowledge about the two most massive bodies in the asteroid belt between Mars and Jupiter. Namely, the giant asteroid Vesta and dwarf planet Ceres.

The next step of these thrusters is to get humans to Mars within twenty years, to do that they have to make them larger and more powerful.

The Dawn is propelled by three xenon ion thrusters which have a combined specific impulse of 3100 s and a thrust of 90mN, using a system that powers spacecraft by accelerating a stream of electrically charged atoms, known as ions.

The singular X3 is a Hall thruster; It functions by turning small amounts of propellant (usually inert gases like xenon) into charged plasma with electrical fields, which is then accelerated very quickly using a magnetic field and has a thrust of 30–70 mN

Compared to chemical rockets, they can go very fast using a fraction of the fuel. Despite their efficiency, they still don’t produce as much thrust as a rocket dependent on chemical propellants.

However, the most recent test on an X3 thruster broke records set by its Hall-effect predecessor. In recent tests, the X3 shattered the previous thrust record set by a Hall thruster, achieving 5.4 newtons of force compared with the old record of 3.3 newtons. The X3 also more than doubled the current operating record (250 amperes vs. 112 amperes) and ran at a slightly higher power (102 kilowatts vs. 98 kilowatts).

The development of this thruster has been managed by Alec Gallimore, a professor of aerospace engineering and the Robert J. Vlasic Dean of Engineering at the University of Michigan.

"Mars missions are just on the horizon, and we already know that Hall thrusters work well in space. They can be optimised either for carrying equipment with minimal energy and propellant over the course of a year or so or for speed - carrying the crew to Mars much more quickly,” he said in a Michigan News press statement. 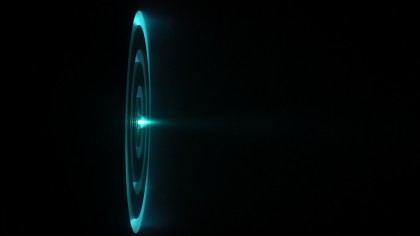 NASA's Record-Breaking Ion Thruster Engine Could Take Us to Mars

"The big moment is when you close the door and pump down the chamber," Hall said to Michigan News.

Eventually, the researchers pushed the X3 to its record-breaking best.

The X3 is one of three prototypes NASA is currently testing to take a human crew to Mars.