NASA has tested its specialized helicopter designed for its Mars 2020 mission.

NASA has finally flown its specialized helicopter due to take flight on the red planet in the Mars 2020 mission. Weighing in at no more than 4 pounds (1.8 kilograms), the helicopter is set to explore Mars' practically non-existent atmosphere.

But first it needs to go through extensive testing set to see how the helicopter could operate on Mars' rough conditions, including its cold temperatures featuring nights as low as minus 130 degrees Fahrenheit (minus 90 degrees Celsius).

"Gearing up for that first flight on Mars, we have logged over 75 minutes of flying time with an engineering model, which was a close approximation of our helicopter," said MiMi Aung, project manager for the Mars Helicopter at NASA's Jet Propulsion Laboratory in Pasadena, California.

"But this recent test of the flight model was the real deal. This is our helicopter bound for Mars. We needed to see that it worked as advertised."

The researchers had to create the right conditions to mimic the thin Martian atmosphere. A such, the Mars Helicopter's first flight was followed up by a second in a vacuum chamber. 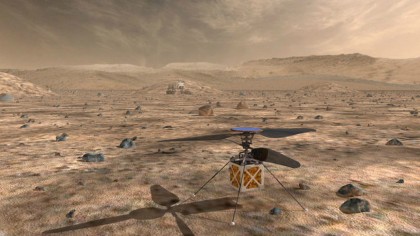 NASA Announces It is Sending a Helicopter to Mars in 2020

"Getting our helicopter into an extremely thin atmosphere is only part of the challenge," said Teddy Tzanetos, test conductor for the Mars Helicopter at JPL.

"To truly simulate flying on Mars we have to take away two-thirds of Earth's gravity, because Mars' gravity is that much weaker."

Everything had to be tested as the next flight will be on the red planet itself.

"The next time we fly, we fly on Mars," said Aung.

"Watching our helicopter go through its paces in the chamber, I couldn't help but think about the historic vehicles that have been in there in the past. The chamber hosted missions from the Ranger Moon probes to the Voyagers to Cassini, and every Mars rover ever flown. To see our helicopter in there reminded me we are on our way to making a little chunk of space history as well."

The Mars Helicopter is set to launch as a technology demonstrator with the Mars 2020 rover. It is expected to reach Mars in February 2021.

The 2020 rover will conduct Martian geological assessments including determining the habitability of the environment.