Neil deGrasse Tyson has urged scientists to think about capturing the energy of hurricanes. He has said he is sick of seeing people evacuate and that we should instead look for ways to use the hurricanes power for our own good.

Hurricane Irma killed more than twenty people in the Caribbean as it hurtled through the region. On the island of St. Maarten, the storm destroyed 70% of its inhabitants' homes. With these kinds of statistics, most of us associate hurricanes with death and destruction. But not astrophysicist Neil deGrasse Tyson. In an interview with Sunday TODAY, he suggested we instead need to think about hurricanes as a potential energy source.

He was on the show to discuss the way in which humanity could better equip themselves to deal with climate change. One idea he floated in the discussion was to find a way to harness the hurricanes for good use. He said, “I’m tired of looking at photos of countless thousands of cars exiting a city, because a hurricane is coming. Where are the engineers and scientists saying, you know, instead of running away from the city that’s about to be destroyed by this hurricane, let me figure out a way to tap the cyclonic energy of this hurricane to drive the power needs of the city that it’s otherwise going to destroy?” He went to exclaim, “Where are those people? You need a culture where that becomes a natural state of how people think, rather than ‘Buy toilet paper! Buy water! Run!'”

It might sound like a good idea on a very broad theoretical plane, but harnessing hurricanes poses some serious problems. For the first thing, hurricanes are extremely unpredictable. Even if their strength and direction could be accurately predicted, the type of science needed to collect their energy does not exist in any form yet. Other weather behaviors such as wind, solar and tidal patterns are all being exploited to generate power and mostly provide a consistent and stable source of energy. Other irregularly occurring weather instances like lightning have been tried to be captured before with no solid outcomes. There are just too many unknowns in these types of weather patterns to make their harvesting doable. 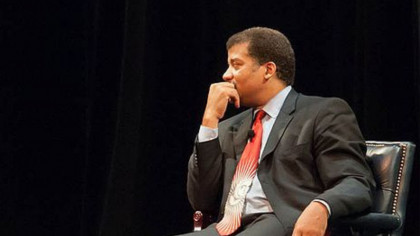 Neil deGrasse Tyson was probably just using hurricane harvesting as an example to talk about the need for more ambitious scientists in the US. Tyson has been accused of other ‘non-sciency’ views in the past.

He has been quoted talking about his belief in spirituality saying, “For me, when I say spiritual, I’m referring to a feeling you would have that connects you to the universe in a way that it may defy simple vocabulary. We think about the universe as an intellectual playground, which it surely is, but the moment you learn something that touches an emotion rather than just something intellectual, I would call that a spiritual encounter with the universe."

He has made it clear that he is agnostic and even edited his own Wikipedia page to ensure that was correctly stated. These sort of beliefs have drawn some low-level criticism from the science community. He also caused controversy when he stated that philosophy is 'useless' during an episode of The Nerdist Podcast. This comment caused Liberian philosopher Massimo Pigliucci to publicly criticize deGrasse Tyson for his views.