Scientists have discovered that people with the gene variant called APOE4 have a higher risk of developing late-onset Alzheimer's disease than the rest of the population. Researchers have found that APOE4 occurs three times more often in patients with Alzheimer's.

Despite this breakthrough discovery, little is known about this version of the APOE and why it would have such a huge influence on Alzheimer's risk. The gene is generally involved with metabolism and the transporting of fatty molecules such as cholesterol.

MIT scientists have conducted an intensive study of APOE4 as well as the more common gene APOE3. The study found that APOE4 assist in the gathering of the beta amyloid proteins that cause the typical plaques seen in the brains of Alzheimer's patients.

"APOE4 influences every cell type that we studied, to facilitate the development of Alzheimer's pathology, especially amyloid accumulation," says Li-Huei Tsai, director of MIT's Picower Institute for Learning and Memory and the senior author of the study.

Problem gene can be edited to reduce risk

The researchers have also successfully experimented in eliminating the risks of Alzheimer's by editing the APOE4 gene and turning it into the APOE3 variant. The gene APOE, comes in three variants, known as 2, 3, and 4.

It binds to cholesterol and lipids in cells' environments, enabling the cells to absorb the lipids. A lipid is a biomolecule, their main tasks include storing energy, signaling, and acting as structural components of cell membranes.

Thirty-seven percent of late-onset Alzheimer's patients carry this version of the gene. "APOE4 is by far the most significant risk gene for late-onset, sporadic Alzheimer's disease," Tsai says.

"However, despite that, there really has not been a whole lot of research done on it. We still don't have a very good idea of why APOE4 increases the disease risk."

The MIT team set out to discover why people with the APOE4 gene have higher levels of amyloid proteins. The researchers used stem cells derived from skin or other cell types call pluripotent stem cells.

They stimulated these stem cells into three different types of brains cells; neurons, astrocytes, and microglia. The scientists then used the gene-editing system CRISPR/Cas9, to convert APOE3 to APOE4.

They were able to analyze the changes in the cells because everything else was identical except for the APOE gene. The experiment revealed that in neurons, cells expressing APOE3 and APOE4 differed in the expression of hundreds of genes.

Approximately 250 genes went down and 190 went up in cells with APOE4. The numbers increased in astrocytes and increased even more in microglia. The study showed that in APOE4 microglia, over 1,100 genes displayed reduced activity, while 300 became more active. 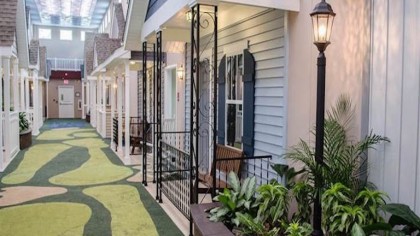 CEO ‘Built’ a New Life for Alzheimers and Dementia Patients

These changes resulted in a reduction in performance in cells whose task is to remove foreign matter. In further experimentation the found they could reverse these effects by using CRISPR/Cas9 to convert the APOE4 gene to APOE3 in brain cells derived from induced stem cells from a patient with late-onset Alzheimer's disease.

"If you can convert the gene from E4 to E3, a lot of the Alzheimer's associated characteristics can be diminished," Tsai says. The full details of the study can be found in the May 31 online edition of Neuron.