One of the most exciting areas emerging in 3D printing does not involve living spaces or even engineered structures like bridges: it is 3D bioprinting.

The multifaceted technique has led to a diverse array of applications, some of which include a bionic eye which may help restore vision for many in the future. It works on an even smaller scale than traditional 3D printing, as the delicate process involves working with biomaterials and cells.

And now thanks to the contributions of a team of scientists from the University of Copenhagen and the Centre for Translational Bone, Joint and Soft Tissue Research based at the Technical University of Dresden, the supportive capabilities behind 3D bioprinting are also growing even more.

Professor Michael Kühl of the University of Copenhagen's Department of Biology led the team. Their work specifically looked at ways to monitor the oxygen metabolism levels of cells which are part of bioinks produced using the method.

To achieve their objectives, the team used bioprinting "combined with online imaging of O2 by functionalizing a hydrogel bioink via addition of luminescent optical sensor nanoparticles". The result: a radically different means of measuring oxygen dynamics.

3D bioprinting which does not compromise the cell

Although the use of stem cells in 3D bioprinting, though still relatively new, is becoming fairly common, the body of work on the subject reveals that many researchers face the issue of destroying the cells--sometimes due to oxidative stress--while replicating the process over time. The most exciting part of the team's work is that the method offers a completely non-invasive approach, which means that the delicate cellular structures remain intact.

As Professor Kühl points out: "[L]iving cells can be 3D printed in biocompatible gel materials (bioinks) and such 3D bioprinting is a rapidly developing field, e.g. in biomedical studies, where stem cells are cultivated in 3D printed constructs mimicking the complex structure of tissue and bones. Such attempts lack on line monitoring of the metabolic activity of cells growing in bioprinted constructs; currently, such measurements largely rely on destructive sampling. We have developed a patent pending solution to this problem.” 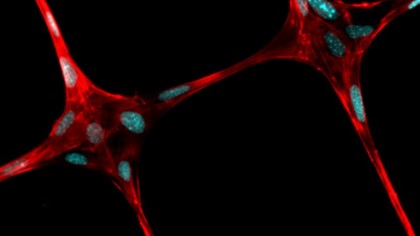 Professor Kühl is also quick to add that the potential of their work goes far beyond their study. "This is a breakthrough in 3D bioprinting. It is now possible to monitor the oxygen metabolism and microenvironment of cells on line, and non-invasively in intact 3D printed living structures.

A key challenge in growing stem cells in larger tissue- or bone-like structures is to ensure a sufficient oxygen supply for the cells. With our development, it is now possible to visualize the oxygen conditions in 3D bioprinted structures, which e.g. enables rapid testing and optimization of stem cell growth in differently designed constructs."

Details about the study appear in a paper, titled "Functionalized Bioink with Optical Sensor Nanoparticles for O2 Imaging in 3D‐Bioprinted Constructs", which was published last month in the Advanced Function Materials journal.