This printer uses an ink infused with bacteria and then can print living biochemical designs with ease.

From pizza to blood vessels to other 3D printers themselves, a lot of items can be 3D printed. However, nearly all of those printer inks used dead materials to produce other dead materials. A new 3D printing platform developed by ETH researchers works with living materials.

Professor Andre Studart, head of the Laboratory for Complex Materials, developed the biocompatible hydrogel ink. This allows Studart and his group which included first authors Patrick Ruhs and Manuel Schaffner to print mini biochemical factories with particular properties. It all depends on which species of bacteria the researchers put into the ink.

"As bacteria require very little in the way of resources, we assume they can survive in printed structures for a very long time," says Rühs.

The ETH team, which is based out of Zurich, not only developed an ink that can handle one bacteria at a time. The new platform could print up to four different bacterial links in a single pass. By combining certain bacteria concentrations together, certain objects can even be printed to have particular specifications or functional properties triggered by the bacteria.

The team noted that ideally, the physical properties of the 3D printed material would have a unique consistency. They said it would be as viscous as most toothpaste with a consistency similar to Nivea hand cream, they reported.

The researchers also noted that they had to overcome a lot of preexisting notions about why they would print with bacteria in the first place. With so much stigma around bad bacteria, it made it difficult for researchers to generate interest surrounding any bacteria they combined with Flink, Ruhs said.

"Printing using bacteria-containing hydrogels has enormous potential, as there is such a wide range of useful bacteria out there," said Rühs. He said the bad reputation attached to microorganisms explains the almost total lack of existing research into additive methods using bacteria. "Most people only associate bacteria with diseases, but we actually couldn't survive without bacteria." 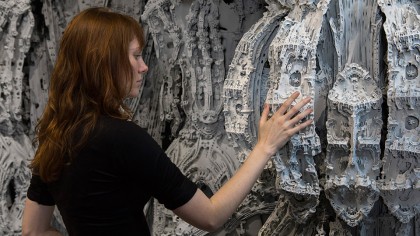 Flink and this new system could provide massive breakthroughs in both biochemistry and biomedicine. This would allow doctors and researchers to choose a species of bacteria to directly address and combat an issue in patients. These 3D printed "biochemical factories" could even be used to make things like artificial skin.

The ETH team hopes to push the limits of the bacterial biogel. They want to use the ink to treat burn victims by printing cellulose-based wound patches. The 3D printed cellulose could also be used to make biosensors or tissue envelopes. One of the biggest benefits of the material is that it's highly unlikely that the body will reject it as the bacteria is already natural to the body.

The team's entire research was published in a paper called "3D printing of bacteria into functional complex materials." It was recently published in the latest edition of the journal Science Advances.