Syracuse University bioengineers developed a way to replicate how a baby's heart forms in order to better understand the effects of prenatal medication.

A new style of 3D tissue could give researchers a better understanding of how prenatal drugs affect mothers-to-be.

Expecting mothers have to take on a lot of prenatal medication, especially to promote healthy heart functions of their child. While most of those prenatal medications have been cleared by the food and drug regulatory bodies, certain drugs don't always have a full range of information available to expecting mothers. Often, these information shortcomings stem from extensive testing on animals but a lack of adequate and well-controlled studies on how the drug affects pregnant women.

"Some drugs are difficult for doctors to prescribe to pregnant women because they don't know the embryo toxicity, how does that effect fetal development," said biomedical engineering Professor Zhen Ma. "They don't have the clinical outcome based on human study."

And the first organ to develop in the womb? The heart, which the research team from Syracuse University heavily focused on during this study. Ma and his team from the university's System Tissue Engineering and Morphogenesis lab worked with pluripotent stem cells in order to create heart tissue.

"This type of stem cell has the ability to generate all the different cells in a human body. Because it was derived from humans," said Ma. Rather than simply see how the medications interacted with the new heart tissue itself, Ma and his team opted to take it one step further. 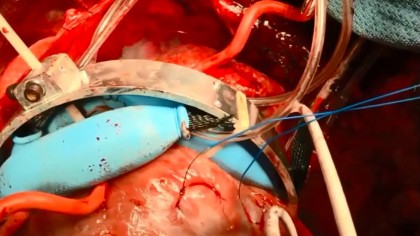 "We can try to rebuild the shape of the early development heart in the lab," said Ma. "It mimics the very early stage, during the embryo genesis - how the heart was formed."

The team combined biomaterials-based cell patterning and recent upgrades in stem cell technology to make a 3D tissue model that would replicate early heart development. They used a layer of polymer in a tissue culture dish and then etched tiny patterns in the polymer. Thus, the stem cells only attached within those patterns rather than the polymer. Eventually, the tissue grew into three-dimensional structures with distinct tissue styles. Ma's team concentrated on cardiac tissue, but the process could easily be used by other labs to create different tissue types.

"Using the cell lines we use, they are human based so we know they will affect human tissue in a certain way as opposed to the uncertainty that comes with an animal model," said graduate student Plansky Hoang.

The researchers said that they want this new process to help mothers and doctors make better choices in prescribing medication for both mother and child. Pregnancy alone stresses the mother's heart 30 to 50 percent more in order to account for the growing baby. Knowing how to best treat the mother's heart health safely will in turn help the baby's heart better develop, the team said.

"It helps people make better decisions," said Ma. "If we can determine it is safe, it should be prescribed to women who need these drugs."

Hoang noted that it could revolutionize how soon-to-be mothers were prescribed medication.

"The traditional way of screening, they take a patient history and then test you on a drug for a month or two and they assess again you after that," said Hoang. "By using our model we can test for multiple drugs at once so if there is a series of drugs that will potentially benefit you, we can test all of them at once as opposed to one at a time that takes longer."