Sensors combine with artificial intelligence to read the micro-expressions our bodies give off in response to our surroundings.

For millions of successful poker players, the key to outwitting other players often rests in the face. The 'poker face' -- a blank expression that never gives away a good or a bad hand -- has become one of the most iconic looks associated with professional poker players.

"We broadcast our emotions. We will know more about each other than we ever have."

Dolby developed a combined sensor and AI system that can tell whether someone is lying, infatuated, or posed for violence, Crum said at a big ideas TED Conference.

"It is the end of the poker face," Crum said. "We broadcast our emotions. We will know more about each other than we ever have."

The sensors track micromovements on our faces that most people don't realize they give off. Eye dilation, for example, shows how hard a brain works in processing its surroundings and maintaining a particular reaction to those surroundings. A rise in the skin's temperature often shows that a body is under stress or even that someone is feeling romantic affections, Crum noted.

These micro-expressions and chemicals in a person's breathing often reveal 'hidden' feelings. The technology developed by Dolby Laboratories can read those cues and then analyze the patterns alongside context of the feelings. Ultimately, the technology could increase the empathy humans feel toward each other by giving a more accurate reading of others' emotions that humans aren't even capable of. Crum cautioned, however, that this powerful technology and others similar could lead to an abuse of emotions and even manipulation.

"It is really scary on one level, but on another level it is really powerful," Crum said. "We can bridge the emotional divide."

Crum suggested that this technology could even save lives by referencing the possibility of a high school counselor using the device to detect whether a 'happy' student actually struggled with depression or other mental illnesses.

She also mentioned the lighter implications of using the system, like painters being able to see the emotional reactions people have to their art or young people being able to use more effective dating apps. 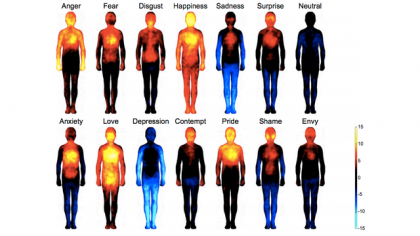 Emotional Atlas Shows Where Each Emotion Affects the Body

Crum said she hoped this technology would promote the benefits of better understanding humans rather than encourage malicious and manipulative behavior.

"It is something people need to realize is here and is going to happen; so let's make it happen in a way we have control over," Crum told AFP.

"We will be able to know more about each other than we ever have. Let's use that for the right reasons rather than the wrong ones."

Crum's talk was just one of several discussing the future of artificial intelligence from the TED conference stage.

Exercising With a Face Mask on Can Be Dangerous, Experiment Shows