"I have never seen such a large displacement caused by human activity".

How powerful is a nuclear explosion? It's enough to move mountains.

An underground detonation, triggered by North Korea in September 2017, was so powerful that it shifted Mount Mantap upwards and outwards by many feet. Researchers conducted a satellite radar imaging and seismic analysis of the area to survey the outcome.

The country is known for its secrecy, but less than a year after the blast, a study published in the journal Science was able to reveal the impact of the event. Beyond shifting the mountain up several feet, the blast also caused seismic activity of 6.3 magnitude. This also caused the top of the mountain to sink by 1.6 ft (0.5 m).

"I have mapped surface displacement from many geodynamic processes such as earthquakes, volcano eruptions, landslides, but I have never seen such a large displacement caused by human activity," study co-author Teng Wang, a remote-sensing and geodesy researcher at Nanyang Technological University in Singapore, said in a statement.

The Democratic People's Republic of Korea became the first country to remove themselves from the Treaty on the Non-Proliferation of Nuclear Weapons in 2003, despite upholding the treaty since 1968. In 2006, the country started nuclear tests. These activities culminated in the September 3, 2017 display of its sixth test — and its most powerful nuclear device yet. Unconfirmed reports suggested that the mighty explosion collapsed a tunnel shortly after the test, killing hundreds of workers inside the mountain.

"Nuclear tests are not common these days," said Matt Wei, a geophysicist at the University of Rhode Island in Narragansett. "However, monitoring nuclear tests is still one of the most important things that we do."

In total, the international team of geophysicists estimated the bomb's power was equivalent to roughly 190 kilotonnes of TNT. For context, that's 13 times more powerful than the bomb that was dropped on Hiroshima, Japan during WWII. This recent analysis actually comes in higher than the bomb's initial power estimates. 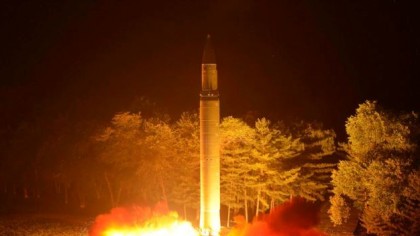 “We have never seen such large displacement caused by human activity via SAR imagery,” said Douglas Dreger, a scientist at the Department of Earth and Planetary Science, University of California-Berkeley and a co-author of the study. “But the vertical displacement is much smaller comparing to the horizontal displacement. We later figured out that this is due to the gravity-driven compaction after the explosion.”

There have also been two different studies from Chinese research teams since the bomb's detonation that suggest that the mountain's partial collapse could compromise it entirely and could be leaking radiation. While the study doesn't speak to whether the site is still usable, it does give geologists around the world new technologies with which to track future detonations.

"The radar information really seems to help create a more accurate picture of what happened at the test site," David Albright, president of the non-governmental Institute for Science and International Security, who was not involved in the study, told The Verge.

The information was published in May 2018 in the journal Science.

Surveillance of clandestine nuclear tests relies on a global seismic network, but the potential of spaceborne monitoring has been underexploited. We used satellite radar imagery to determine the complete surface displacement field of up to 3.5 meters of divergent horizontal motion with 0.5 meters of subsidence associated with North Korea’s largest underground nuclear test. Combining insight from geodetic and seismological remote sensing, we found that the aftermath of the initial explosive deformation involved subsidence associated with subsurface collapse and aseismic compaction of the damaged rocks of the test site. The explosive yield from the nuclear detonation with best-fitting source parameters for 450-meter depth was 191 kilotonnes of TNT equivalent. Our results demonstrate the capability of spaceborne remote sensing to help characterize large underground nuclear tests.