A team from the University of Dundee developed an app called MyCoast in order predict urban flooding and fill the gaps in a lack of data.

As climate change continues to shape the world, rising ocean levels become an increasingly real threat to thousands of coastal communities around the world. One team of scientists and engineers created a tool that could help these areas better prepare for natural disasters caused by global warming and other unexpected floods.

A group from the University of Dundee in Scotland showed how AI, social media and crowdsourcing can all contribute to tracking urban flooding. Urban flooding, in particular, is difficult to monitor due to data collection difficulties. The Dundee team hoped that this 'technological trifecta' could circumvent the lack of data around urban flooding. The team called the process MyCoast, and the system currently contains over 6,000 flood photographs collected through the resulting mobile app.

Unlike more traditional flooding, flooding in urban areas is normally caused by flash flooding or excessive coastal flooding. It's a type of flooding compounded specific to the area in that there are very few places to drain the water throughout the city.

According to Roger Wang at the University of Dundee's School of Science and Engineering, data extraction could be surprisingly accurate given the lack of data.

"A tweet can be very informative in terms of flooding data. Key words were our first filter, then we used natural language processing to find out more about severity, location and other information. Computer vision techniques were applied to the data collected from MyCoast, a crowdsourcing app, to automatically identify scenes of flooding from the images that users post," Wang said in a press release.

"We found these big data-based flood monitoring approaches can definitely complement the existing means of data collection and demonstrate great promise for improving monitoring and warnings in future."

According to the researchers, present recording systems have their own distinct disadvantages. Thus, the team had to think outside of the box for traditional data gathering. The researchers realized that Twitter users provide some of the best and most accurate commentary on flooding. 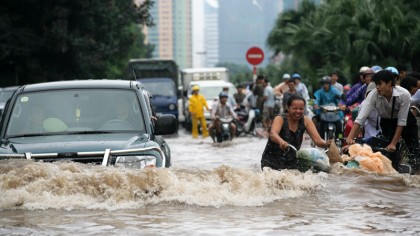 The researchers streamed tweets for a one-month slice of 2015 and the team used keywords in order to analyze and isolate tweets.

"Without A.I., there would be a lot of noise in data, since many tweets with keywords can still be irrelevant," Wang said.

"Computer vision techniques require further refinement to improve recognition of flood situations rather than standard coastal scenes or other environments featuring water," continued Dr Wang. "We have reached the point of 70 percent accuracy and we are using the thousands of images available on MyCoast to further improve this.

"Taken together, these tools can be used to monitor the water penetration of urban flooding over a city. This can be then used to improve forecasting models and early warning systems to help residents and authorities prepare for an upcoming flood."

Wang noted that the research could be a valuable step not only for how floods can be tracked but also for aggregating 'citizen science' in general.

Via: University of Dundee