Researchers from Singapore developed an autonomous robot that can assemble a piece of IKEA furniture in just under 9 minutes.

While most IKEA furniture buyers struggle for hours to connect the pieces of their Dombas, one new innovation can whiz through the process in less than 20 minutes. A team from Nanyang Technological University in Singapore (NTU Singapore) developed an autonomous robot that can assemble an IKEA chair without mistake.

To be more specific, the robot assembled a wooden IKEA chair in just 8 minutes and 55 seconds. An additional 11 minutes was spent going through the parts before construction (aka the step all humans should do when they unpack IKEA parts but never actually do).

The robotic system was designed by Assistant Professor Quang Cuong and his team from NTU's School of Mechanical and Aerospace Engineering. The automated system uses a 3D camera and two gripping robotic arms in order to identify and pick up objects.

The engineers equipped each arm with similar range of motion to that of a human. Sensors found on the wrists of the robot keep track of just how much force is being exerted by the fingers as it works.

"For a robot, putting together an IKEA chair with such precision is more complex than it looks," Professor Pham explained in a press release. "The job of assembly, which may come naturally to humans, has to be broken down into different steps, such as identifying where the different chair parts are, the force required to grip the parts, and making sure the robotic arms move without colliding into each other. Through considerable engineering effort, we developed algorithms that will enable the robot to take the necessary steps to assemble the chair on its own.

"We are looking to integrate more artificial intelligence into this approach to make the robot more autonomous so it can learn the different steps of assembling a chair through human demonstration or by reading the instruction manual, or even from an image of the assembled product."

The robot starts working by taking 3D photos of the parts all laid out before it. This allows it to generate a map of the positions of each part. The researchers programmed the robot like this in order to replicate the often messy conditions in which humans work -- especially after unboxing any DIY project.

Algorithms then assist the robot in planning its movements. The researchers reported that the movements of both hands were fast and collision-free. In order to make sure the robot grips the pieces tightly, researchers kept a close eye on the amount of force in each movement. (That's where the sensors on the wrists became incredibly helpful.)

"One reason could be that complex manipulation tasks in human environments require many different skills. This includes being able to map the exact locations of the items, plan a collision-free motion path, and control the amount of force required. On top of these skills, you have to be able to manage their complex interactions between the robot and the environment," Pham explained. 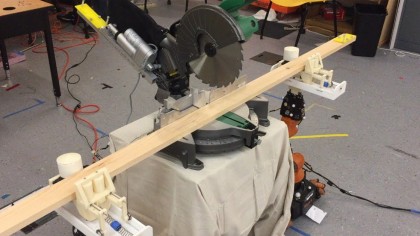 "The way we have built our robot, from the parallel grippers to the force sensors on the wrists, all work towards manipulating objects in a way humans would," he added.

Ultimately, Pham and his team said they want the robot to fill in for humans in situations where autonomous work would make a work environment safer for humans. The team is currently working alongside automotive and aircraft manufacturers to see how this robot could be used in their respective industries.

And, for anyone looking to upgrade their IKEA build into a massive wardrobe or bed frame, they'll be disappointed. As of now, the autonomous robot only builds an IKEA chair.

IKEA Shares Instructions on How to Build Furniture Forts Amid Quarantine