A new smartphone with a graphene touch display just debuted at a trade show in Chongqing, China.

A Chinese company was showing off their new graphene smartphone which has full touchscreen capabilities and has the ability to bend completely around a wrist. Very little is known about the phone as of now- however, what is known is that the phone is extremely flexible and weighs just 200g.

You can check out the phone below:

Ever since the isolation and discovery of graphene in 2004 by researchers Prof Andre Geim and Prof Kostya Novoselov at the University of Manchester, graphene technologies have been popping up in laboratories worldwide. Its properties including superb conducting and clear opacity make its potential technological applications endless. At just one atom thick, it can be applied over top of screens to create a touchscreen.

Essentially, graphene is a single layer of pure carbon that is only one atom thick, but its properties make it one of the strongest, lightest, and most transparent materials around. Graphene is also an incredible conductor of heat and electricity, which one day may make it one of the greatest contributions to technology. 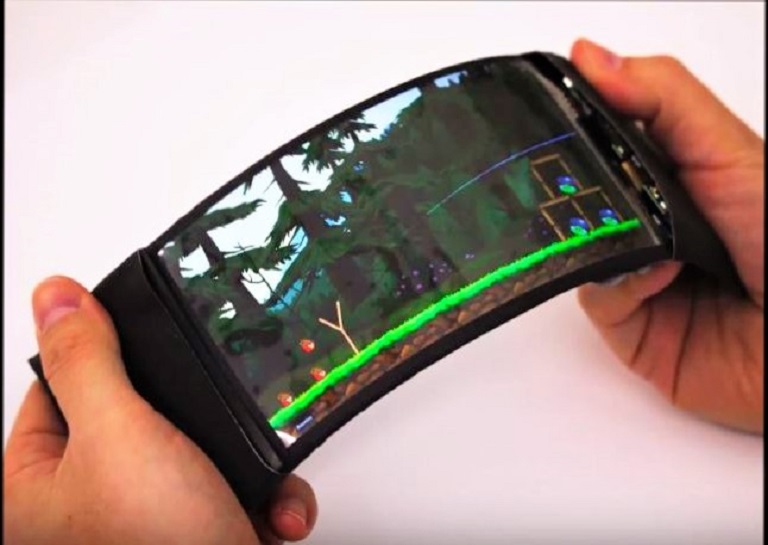 As of now, graphene is too expensive to manufacture at an industrial scale, however, scientists are actively working on producing a cheaper more viable method to apply it to devices. The new smartphone displayed at the convention still lacks the standard image qualities set by LCD and OLED displays. Although the image quality may not be at par with current HD screens, the new bendable graphene touchscreen phone remains an exciting feature to look forward to when it will enable devices to be thinner, lighter, and incredibly tougher. Let us know in the comments below what you think about this revolutionary new technology!