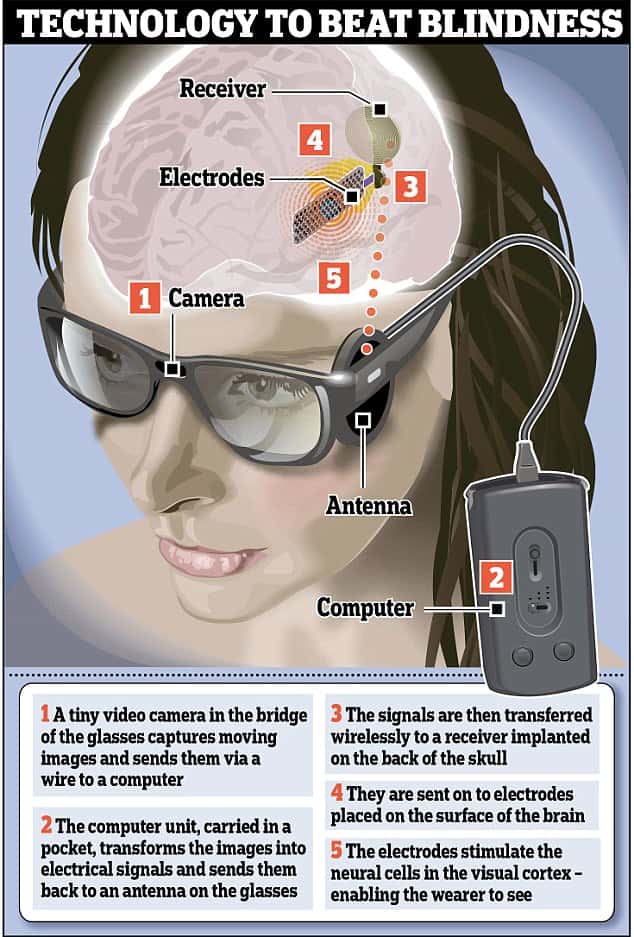 A new type of bionic eye could be the answer to giving millions the chance to see again. Scientists have developed an eye that sends moving images directly to the brain using a chip.

Surgeons successfully implanted a visual stimulator in a 30-year-old woman's brain. The chip caused her to see flashes of color, spots and lines.

Doctors at UCLA performed the operation, and the patient consistently saw the exact signals sent to her visual cortex.

"The moment she saw color for the first time was a very emotional experience. It touched us all very deeply as human beings. Based on these results, this system has the potential to restore sight to the blind."

The procedure was simple. Surgeons cut a small hold in the back of the patient's skull and laid the stimulator on the surface of her brain. A small receiver implanted into the skull gets the signals from the computer.

Researchers are waiting on the Food and Drug Administration to approve sending a video feed to the chip. The system, called Orion I, captures images from a camera on a pair of glasses.

Dr. Robert Greenberg, chairman of Second Sight, which developed Orion I, said in an interview:

"It is rare that technological development offers such stirring possibilities. By bypassing the optic nerve and directly stimulating the visual cortex, the Orion I has the potential to restore vision to patients blinded due to virtually any reason, including glaucoma, cancer, diabetic retinopathy, or trauma."

Second Sight's Orion project comes after a successful trial of their Argus II Retinal Prosthesis. Will McGuire, President and CEO of Second Sight, said he looks forward to the possibilities ahead for the company and patients:

"While we still have much work ahead, this successful human proof of concept study gives us renewed energy to move our Orion I development efforts forward. We believe this technology will ultimately provide a useful form of vision for the nearly six million people worldwide who are blind but not a candidate for an Argus II retinal prosthesis.

There are an estimated 285 million visually impaired people worldwide, according to the World Health Organization. Of that number, 39 million are completely blind. About 90 percent come from low-income backgrounds, and 82 percent are over the age of 50. Making this type of procedure low cost could have a massive impact on the lives of those who would otherwise have no hope.